Gig Harbor Film Festival back on big screens this week

Posted on September 19th, 2022 By: Charlee Glock-Jackson
Share this article:

After an unexpected two-year intermission, the Gig Harbor Film Festival is back in full force this week.

For four days – Sept. 22–25 – the screens at the Galaxy Theatres Gig Harbor will light up with 61 films. Among them are two world premieres, five Washington state premieres and several U.S. premieres.

Eight of this year’s films were made locally. Many of the directors will be on hand to discuss their work. 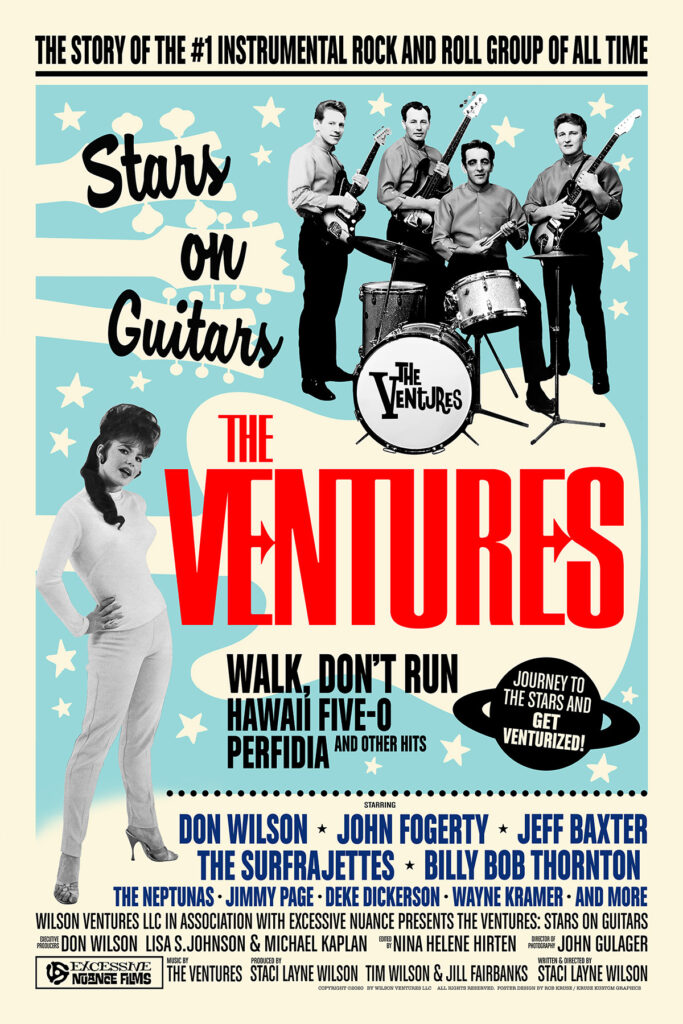 The festival opens Thursday evening with a special three-theatre screening of “The Ventures: Stars on Guitars,” a documentary about the No.1 instrumental rock group in the world.

From their start in Tacoma in 1958, they changed the way rock musicians thought of the guitar. The film will be shown at 6:30 p.m. Thursday, in three theaters simultaneously.

(Spoiler alert: Ventures band member Raiyuki has flown in from New York and he, along with the family of Ventures co-founder Don Wilson, will be available for a post-movie Q&A at the IMAX Theater.)

The festival’s curating team selected every film, and each has special attributes.

“Ancestral Waters” traces the Puyallup Tribe’s fight for their treaty rights, their waters and their way of life since the signing of the Medicine Creek Treaty. “Ancestral Waters” plays at 5:15 p.m. Friday and 10:05 a.m. Saturday.

“This Land is Part of Us” explores central Washington’s shrub-steppe ecosystem. Often mistaken for desert, the shrub-steppe is a land of rich biodiversity, vibrant communities and poignant beauty. The film is part of the Documentary Shorts series and plays at 9:30 a.m. Friday and 11:55 a.m. Saturday.

“Stand Up,” directed by Gig Harbor filmmaker Carly Vester, is the story of two women who stand up against female marginalization by undertaking a 70-mile, 48-hour paddleboard race. The film plays at 1 p.m. Friday and 1:35 p.m. Saturday.

“700 Feet Down,” directed by Gig Harbor resident Peter Bortel, tells the tale of Galloping Gertie, from the perspective of those who watched the construction and collapse of the first Narrows Bridge. The film incorporates the stories of divers lured by stories of the giant octopus that lives in the underwater wreckage of the ill-fated bridge. See this film at 11:35 a.m. Friday or 2:20 p.m. Saturday.

“A Grievance with Gravity” is a light-hearted story of Zoe, who wears bricks and cinderblocks on her feet to weight her down because gravity doesn’t affect her. This film’s Washington state premiere is part of the Shorts series. It plays at 2:05 p.m. Friday and 12:05 p.m. Saturday.

“David Mirisch” introduces the audience to a legendary Hollywood press agent known as “The Man with the Gold Rolodex.” His family produced such classics as “Some Like it Hot,” “West Side Story,” “Moby Dick” and “Fiddler on the Roof.” The film will be screened at 6:20 p.m. Friday and 10 a.m. Saturday.

“The Strange Batch” is a collection of 10 “wonderfully weird short films” including “Tacos for (Reacted), “Freya,” “It Can Walk,” “Closed for the Weekend” and “Love Me Tinder” that are, well, quirky. The Strange Batch will play at 2:40 p.m. Friday and 7 p.m. Saturday.

“Dick’s Long Ride” and “SOLDIER” are part of the Documentary Shorts series scheduled for 11:50 a.m. Friday and 2:25 p.m. Saturday.

“SOLDIER” focuses on Daniel Krug, a heroic firefighter, father of five, SWAT trainer and former military sniper who did several tours in Iraq, and who has lost many close friends – and almost himself – to PTSD. Local PTSD support groups will attend the screenings.

“The Dummy Factor” has its Washington state premiere Friday. The film follows a 12-year old boy as he investigates the disappearance of a child in his neighborhood. It plays at 11 a.m. Friday and 7:10 p.m. Saturday.

“Thunderbird” and “Shenandoah” tell the stories of two boats with deep local roots.

“Thunderbird” traces the history of the build-it-yourself plywood sailboat that was designed by Gig Harbor resident Ed Hoppen, and then sold in kits to hundreds of people all over the U. S.  It screens at 6:40 p.m. Saturday and 1:40 p.m. Sunday as part of the Made in Washington Series.

The fishing boat Shenandoah is being restored in the Maritime Gallery at the Harbor History Museum.

The purse seiner Shenandoah, built at Skansie Ship Building Company in Gig Harbor in 1925, is currently being restored by volunteers at the Harbor History Museum. Pasco Dorotich and his son John owned the boat before selling it to Tony Janovich.

It mostly fished the salmon banks in the San Juan Islands, along with a few trips to Alaska. The world premiere of “Shenandoah,” also part of the Made in Washington series, is at 11:55 a.m. Friday and it plays again at 11:30 a.m. Sunday. The filmmaker will answer questions after the screenings.

Another Made in Washington film, “Layla’s Rain” tells the story of the 1935 dustbowl and a mysterious carnival gypsy who sacrifices everything to rescue a deserted blind girl. Producer/director Kit Wilson, whose films have been shown at 135 festivals worldwide, lives in Gig Harbor. Layla’s Rain plays at 6:40 p.m. Saturday and 1:40 p.m. Sunday.

And the award goes to …

A highlight of the festival takes place Sunday, with the selection of the Director’s Choice award and its screening at 11:15 a.m. and 1:45 p.m.

The Gig Harbor festival is a world-class event, Holt said. “There are approximately 10,000 film festivals in the world, and we’re in the top 100.”

In spite of the two-year hiatus, putting together this year’s event wasn’t as difficult as it might have been.

“We pretty much had everything in place in 2021, then had to cancel at the last minute when it was obvious that the pandemic wasn’t letting go,” Holt said.