Posted on September 21st, 2022 By: Charlee Glock-Jackson
Share this article:

If you’re walking around downtown Gig Harbor, or on the Cushman Trail, or just about anywhere in the area, you might be lucky enough to spot a little painted rock.

Chances are it was left by a one of the artists from Gig Harbor Rocks. Members of the loosely organized group paint small stones and hide them in plain sight. The painted rocks can be found on park benches, under bushes, in parking lots and other unexpected places. 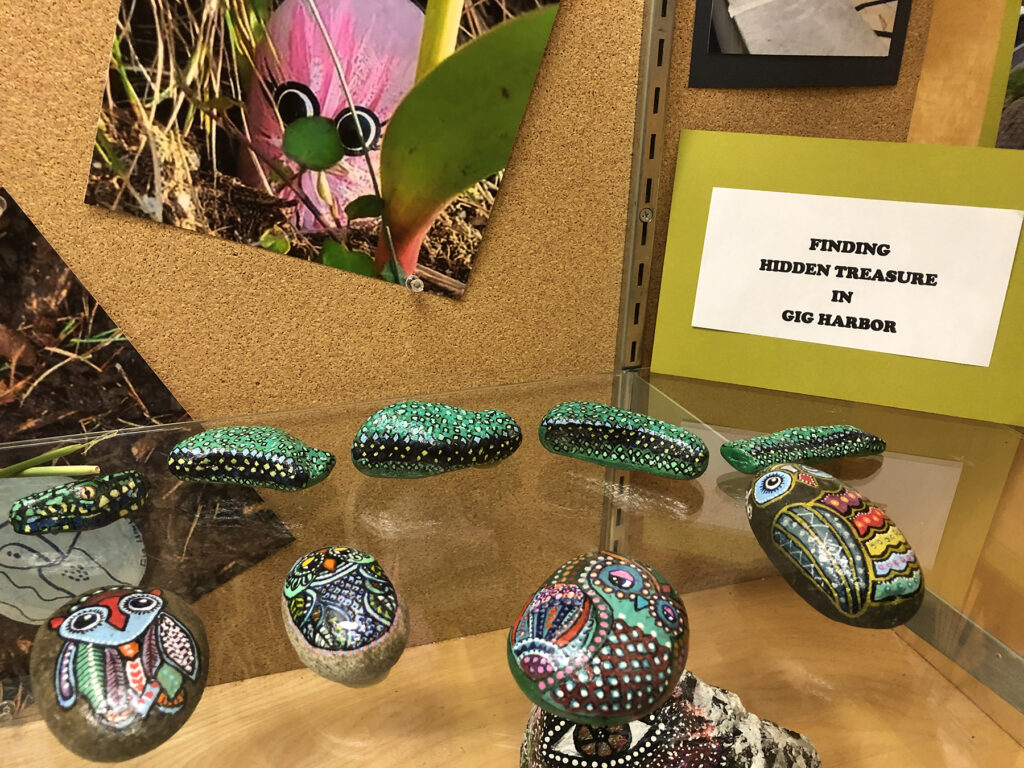 “It seems everyone who goes on the Cushman Trail or to a local park knows to keep an eye out for these beautiful little treasures,” Diane Bertram, the city’s HR assistant, said.

On display through Sept. 26

Bertram has gathered a collection of rocks painted by the Harbor Rocks group and put them on display at the Civic Center through Sept. 26.

Many of the people who find a painted rock post a photo of it on the group’s Facebook page. Some keep the stones they discover. Others leave them for someone else to find, or move them to another location.

People have found locally painted rocks as far away as Oregon and California, according to the Facebook postings.

There are rocks adorned with cats, cows, snakes and strange lizard-like creatures, flowers, flipflops, local landmarks and colorful abstract designs. There’s a bright blue and yellow sun/moon face, a “rock-a-bye-baby’ in a bassinet and a parliament of owls.

Bertram learned about the Gig Harbor Rocks group during the pandemic, when the city closed the Civic Center to the public.

Someone from the group placed a black rock with a Thin Blue Line design painted on it near the fence by the Police Department.

“That little gesture of kindness brought so much joy and a smile to everyone in the department,” Bertram recalled. “They still have it on display.”

“So I thought it was time the rock artists received some recognition for their voluntary beautification efforts. The display at city hall is just our way of saying thank you to the artists.”

And hopefully, Bertram added, it will also “encourage other people to go out and walk around our beautiful town and find more of these hidden treasures.”