Posted on August 8th, 2022 By: David Armstrong
Share this article:

When he was a kid growing up in Lebanon, Wally Mseitif devoured American cowboy movies. It seemed natural that when he grew up, he’d fly off to America and become a rough-and-ready cowboy himself.

Mseitif didn’t ride the range when he came to America, but he’s had other adventures here. Notably, he had a long career as a Boeing engineer.

Now, ostensibly retired, he is a summer fixture at the Waterfront Farmers Market in Skansie Brothers Park, some 6,700 miles removed from Lebanon.

Yellow Belly: ‘All the good stuff’

Wally and his wife of 39 years, Annette (aka Annie), sell premium raw honey from their Yellow Belly Farm booth to farmers market shoppers with a sweet tooth and a hunger to connect to small artisan producers close to home.

“Yellow Belly Farm honey is unheated, unsprayed and unfiltered. It has all the good stuff that’s in the honey,’’ Wally Mseitif says.

According to the Mayo Clinic: “Honey contains mostly sugar, as well as a mix of amino acids, vitamins, minerals, iron, zinc and antioxidants. In addition to its use as a natural sweetener, honey is used as an anti-inflammatory, antioxidant and antibacterial agent. People commonly use honey orally to treat coughs and topically to treat burns and promote wound healing.”

“We sell blackberry, blueberry, clover, raspberry,’’ Wally says, adding that by the end of August, Yellow Belly will also sell a late-summer favorite: lavender honey, made with lavender the Mseitifs grow on the farm.

“The color, flavor and aroma of the honey (which Yellow Belly sells in glass jars in a variety of sizes) is determined by the location of the hives,’’ he explains. 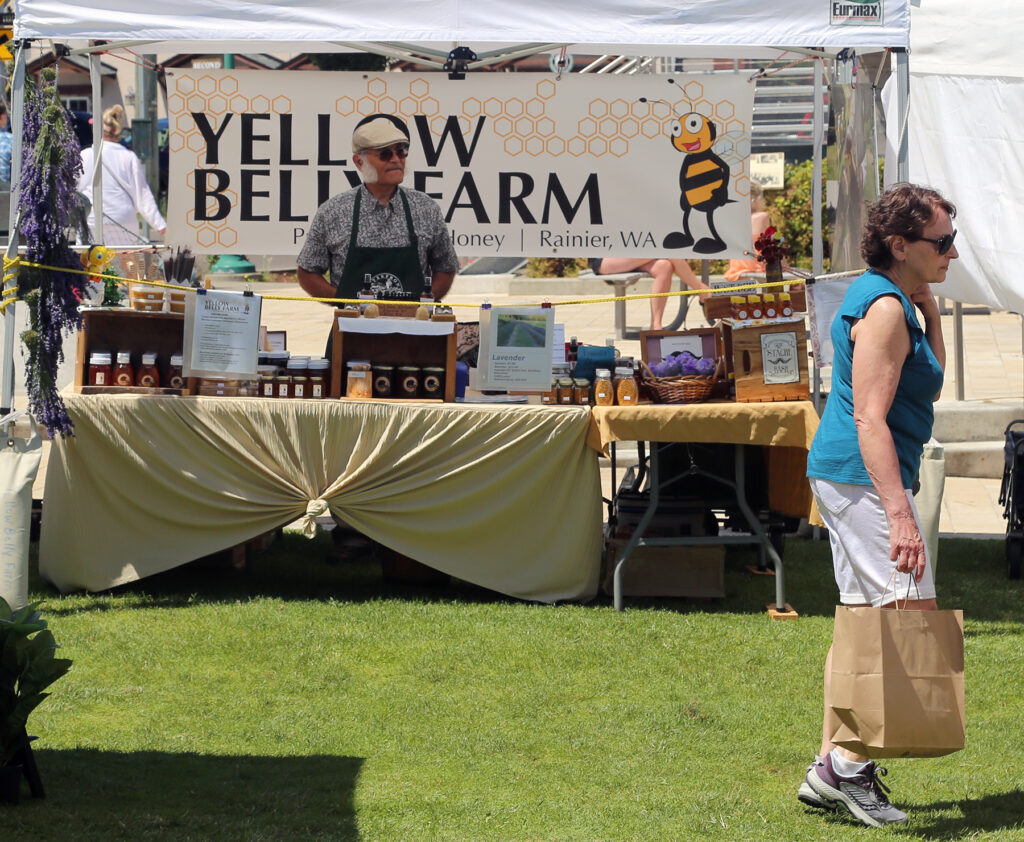 From Boeing to beekeeping

Wally Mseitif followed a long and winding road to become a beekeeper and artisan honey merchant.

Mseitif came to the U.S. in 1970, after bidding goodbye to his Armenian mother and Syrian father in Lebanon.

He had $500 from his father, who worried that Wally would struggle so far away from home in an unfamiliar new place.

The young immigrant enrolled at the University of Washington, where he earned two engineering degrees: “I became a chemical engineer and an electronic engineer.’’ Then the Boeing Company came calling. He liked what they had to say.

“I was at Boeing for 27 years,’’ Mseitif says. “The first 22 years I was in the military division. The last five years I was in Boeing Commercial Airplanes.’’ One of the projects he worked on was the International Space Station.

When Wally retired, the Mseitifs moved from Auburn to Rainier. Finding himself with time on his hands, Wally watched a television program about beekeeping. He became intrigued, bought a few beehives and started making honey as a hobby on the 11-acre spread the couple bought in Rainer.

‘’The honey tasted so good the first year,’’ he says, savoring the memory. “Our daughter suggested selling it.’’

Around the same time, “Our son graduated from UW with a graduate degree in business economics.’’ He became manager of the family business and helped write a business plan for the fledgling company.  That was in 2014.

On Thursdays from early June to early September, the Mseitifs drive 45 miles to the Gig Harbor farmers market, about an hour from Rainer. Once in Gig Harbor, they are met at the curb by farmers market volunteers, who help unload stocks of honey and set up their booth on the northern edge of the market. When the market closes, volunteers help them reload for the drive home.

It’s a good system, Wally believes, and the Downtown Waterfront Alliance — the nonprofit that has run the market since its inception in 2015 — is an efficient and fair-minded operator.

Like the other vendors, Yellow Belly Farm pays a fee to the Alliance. The fee, he says, varies week-by-week, “depending on the income you generate on Thursday. It’s pretty reasonable.”

About the only critical thing Wally says is: “It’s very hard to find parking sometimes.’’

The Mseitifs have set up shop in the Gig Harbor market since 2016, two years after launching their business. They’ve sold their sweet, viscous treat in “four or five’’ farmers markets at various times.

For the most part, business at the humming Harborview Drive destination market is good.

Yellow Belly’s honey is well-regarded by many shoppers, and Wally Mseitif’s engineering background is probably one reason why. He brings an engineer’s meticulous approach to the task of producing consistently good products.

There’s more to it than that, though. He’s quick to allow that “I have had a couple of mentors.’’ He subscribes to journals about beekeeping and follows academic research about bees.

Wally has studied the evolution of colony collapse disorder, an initially mysterious condition that wiped out pollinators and honeybees around the country. Scientists now ascribe the problem to bee parasites and some classes of pesticides. As noted, Yellow Belly Farms attests it doesn’t use pesticides.

Not just a hobby farm

Keeping bees and selling honey may have started as a hobby, but it’s far from a hobby now. “This is a full-time job,’’ Mseitif says simply.

It’s a job that comes with challenges that affect small businesses and big corporations alike. Among them are a volatile economy with high inflation and shaky supply-chains, plus a global pandemic.

The hardest blow in the eight years Yellow Belly has been in business came from Covid-19. Business dropped by half in the bleakest moments of the early pandemic, when lockdowns and cancellations were everywhere. That was in 2020. “We usually sell at holiday bazaars at end of each year. There were no holiday bazaars in 2020.’’

More recently, the business has had to grapple with inflation. This summer, the Mseitifs raised prices on some items by $1. A few customers noticed the added dollar, but still bought the products.

For a while it was tough getting frames, but that seems to be over.

The Mseitifs, hard-working and persevering, plan to work the farmers market through closing day, Sept. 9. As far as they know now, they’ll be back in Skansie Park in 2023.