Patterson’s Farm Market made it through the worst days of the Covid-19 pandemic, despite not qualifying for relief programs available to small businesses that were just a little bit larger.

Everything that came after — along with a business savings account drained by the two-year ordeal of shutdowns and slow sales caused by the pandemic — almost did in the 38-year-old Gig Harbor institution.

But when the seasonal stand didn’t open in the spring like usual, customers noticed.

One of those customers launched a GoFundMe campaign to help the family-owned farm stand stay afloat. Others made an extra effort to stop by and shop.

One customer, a truck driver who routinely drives back to the area with an empty rig, offered to bring produce from suppliers in the Wenatchee area.

Now the stand on the corner of 38th Avenue and 56th Street is back up and running. Owners Rick and Shelli Patterson are optimistic about the future and overwhelmed by the support. 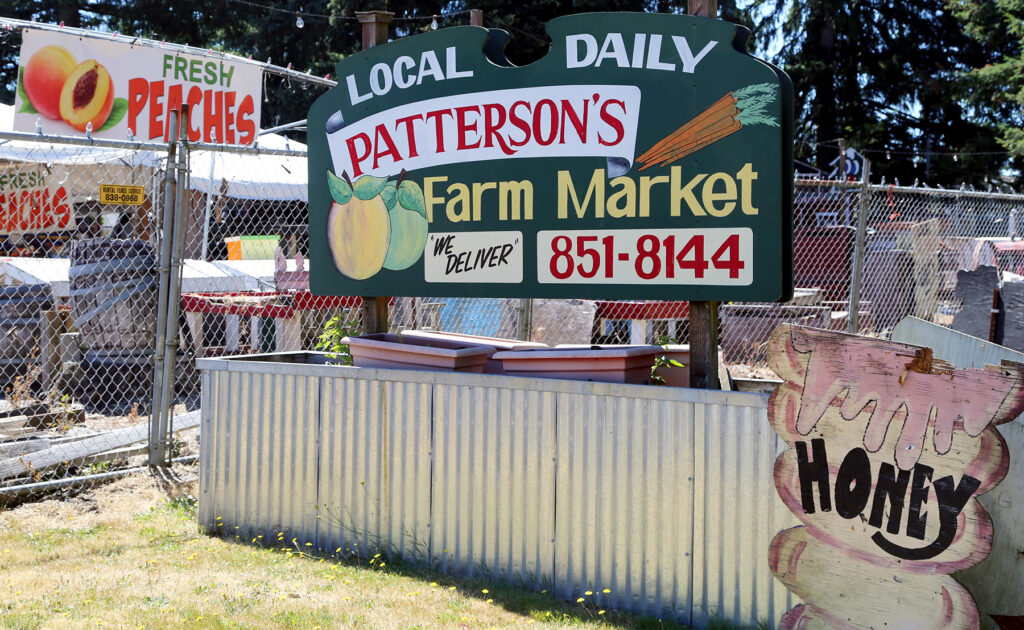 The Patterson’s Farm Market sign is a familiar site for the many people who pass by the store on the corner of 38th Avenue and 56th Street. Vince Dice

The Pattersons dated all four years they attended Gig Harbor High School and got married soon after graduating. They started Patterson’s Farm Market not long after that.

Rick’s family grew Christmas trees in the area, and they have family and friends who operate farms in the Wenatchee area. Their idea, which sustained their family for better than three decades, was to sell fresh local and regionally sourced produce to the growing Gig Harbor community.

“It’s so awesome to buy from people who are like us,” smaller and family-owned farms, Shelli said. She had just returned from a trip to such a supplier in Puyallup. “That’s our niche … We obviously can’t compete with Costco.”

Patterson’s is also known for its Pumpkin Patch, a Halloween season tradition for many local families. And untold thousands of Gig Harbor-area residents have bought Christmas trees from the Pattersons. Rick even delivers and sets up trees for people who need it.

Rick, Shelli and Hailey Patterson at Patterson’s Farm Market on the corner of 38th Avenue and 56th Street in Gig Harbor on July 25. The longtime Gig Harbor institution faced a crisis this spring before a community-supported effort helped the farm stand get back on its feet. Vince Dice

Covid-19 was especially tough on small retailers like Patterson’s.

“It was all we could handle. Our sales were one-tenth of what they should be,” Shelli said.

“We just fell through the cracks. We didn’t get anything,” Shelli added.

They survived 2020 and 2021, but just barely. They got several months behind on their home mortgage, prioritizing paying rent on the farm stand location. Daughter Hailey worked without pay.

The business savings dwindled in the wake of two years of slow sales, but they made it.

“When this year came, everything crashed down on us,” Shelli said.

The challenges in 2022 have been many.

Inflation made it difficult for the Pattersons to buy product. A cool spring and early summer left the family with little to sell, especially since Patterson’s deals in locally and regionally-sourced produce. That scarceness drove up prices even more.

The spring spike in gasoline prices played a role as well. Rick and Shelli typically pick up their products personally, from farms and orchards on both sides of the Cascades. With gas prices soaring, those long trips don’t pencil out as well.

The stand usually opens in May. Due to the confluence of issues, it didn’t. Customers wondered why.

“I had been worrying,” Leigh Anne Yuhasz said. “I knew something was wrong because they weren’t opening.”

Peaches for sale inside Patterson’s Farm Market this week. A late growing season, caused by an unusually cool spring, was among the issues the stand faced in 2022. Vince Dice

Community rallies to save Patterson’s

Yuhasz has been a customer of Patterson’s for most of the 38 years the stand has existed. She watched the Pattersons’ children grow up, and they watched hers. Her son has been a seasonal employee during the Halloween and Christmas seasons.

When the stand finally opened in July, she asked them what happened. After some prodding, the Pattersons explained their troubles.

Yuhasz had never used GoFundMe before, but she offered to figure it out and launch a campaign. It took some convincing.

“We are always the helpers,” not on the receiving end, Shelli said.

Once the call went out, the community responded. More than $11,000 was donated to the GoFundMe, which started out with an $8,000 goal. (The current goal is $15,000). One customer, stopping by to get peaches, told the Pattersons to put an extra $300 on her credit card. A local business, which prefers to remain anonymous, made a four-figure donation.

The Pattersons are already thinking about ways to pay it forward.

“Hopefully, with what the community has done for us, we’ll be able to give back, too,” Rick said.

Yuhasz pointed out that the Pattersons have given plenty to the community already. Mostly, she’s just happy that her friends are still in business.

“It’s a different experience” shopping at Patterson’s. “It’s something you don’t see in most cities. … It is personal, and they know you. They ask about my kids, and my dogs. And it’s not just me, it’s everybody.

“It’s a corner market that means something to the community.”