Posted on August 10th, 2022 By: Dennis Browne
Share this article:

The sport of mixed martial arts has taken the country by storm and is steadily climbing the list of America’s favorite sports to watch.

One might expect to encounter people with brutish demeanors and challenging dispositions in a mixed martial arts studio. That stereotype proved far from the truth after sitting in for a 90-minute session at Gig Harbor MMA.

Students calmly and cohesively worked during a kickboxing/stand-up class taught by owner and professional fighter Chris Stone. Stone, a 33-year-old Peninsula High School graduate, began as a student at GHMMA in 2010. He bought the business from his instructor, Dave Bird, in 2014. 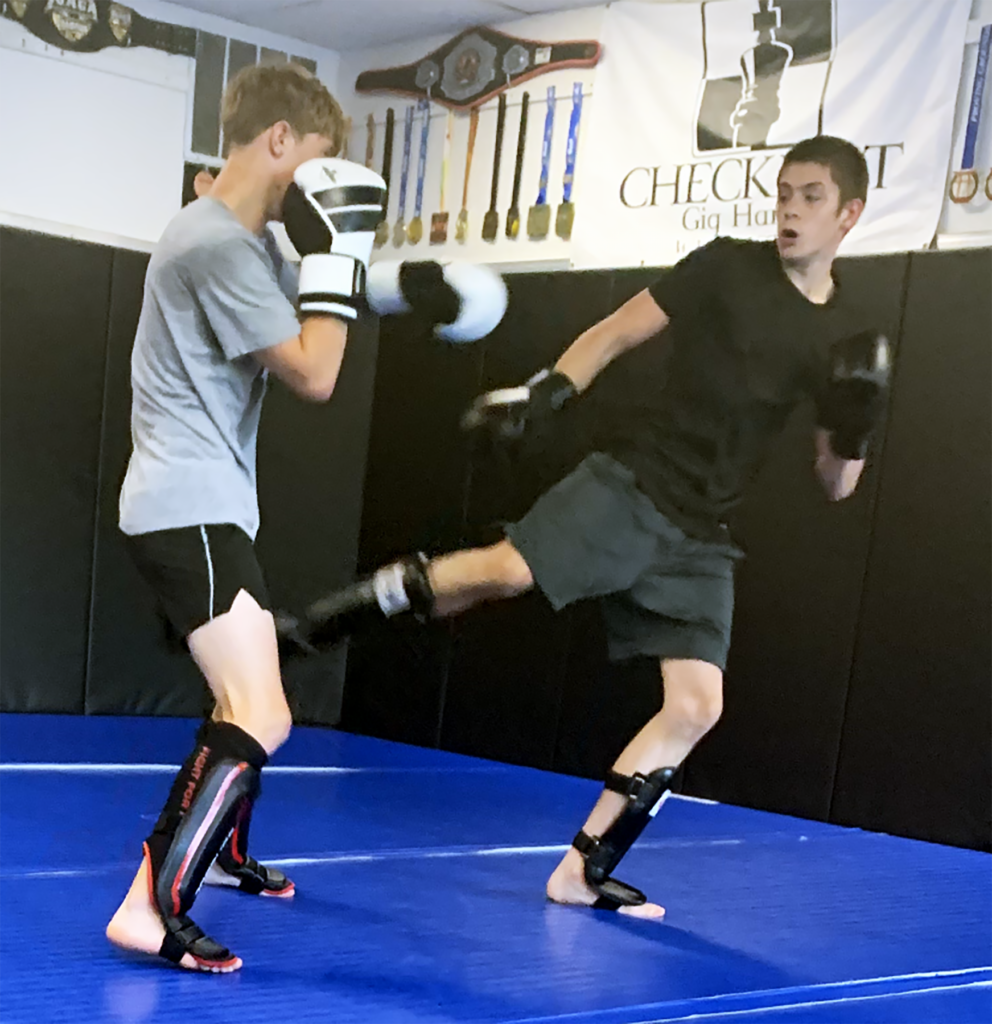 Stone holds a first degree black belt in Brazilian Jiu Jitsu and a 7-1 record as a professional fighter in the lightweight division.

His strong calves, barrel chest and cauliflower ears suggest he has trained hard and paid the price to be a professional fighter. But his easy smile and welcoming nature suggest he’s an instructor who deeply cares about his students’ well being, as well as promoting the sport he loves.

Training sessions are broken into 3-minute intervals. They start with jumping rope, then a segment of lateral movements with head level changes, then 3 minutes on how to slip a punch and counter attack. Other 3-minute units focus on shadow boxing, exploring different techniques.

This 6:30 p.m. class consists of 14 students, 13 men and one woman, ages 16 to 40. They pay $130 a month for unlimited training at the facility located at the Soundview Buisness Park, 5775 Soundview Dr No. 101A in Gig Harbor. Classes are scheduled throughout the day to accommodate students of all skill levels and ages, from younger than 6 to older than 60.

A boom box blasts music as students bounce to the beat during three more boxing segments, culminating in a combination of a double jab, a straight right hand and a left kick to the ribs. The moves are quick, precise and effective.

Stone circles the mat, offering advice on how to block a kick, parry a jab or maintain proper spacing.

“It’s the competition and the challenge that got me involved in the sport, but the relationship with my students and helping them improve is what is most important now,” Stone says.

By this time, 60 minutes into the session, the aerobic impacts of the workout are evident. Students are dripping sweat, breathing heavier and feeling the endorphins flow as their pulse rates rise. 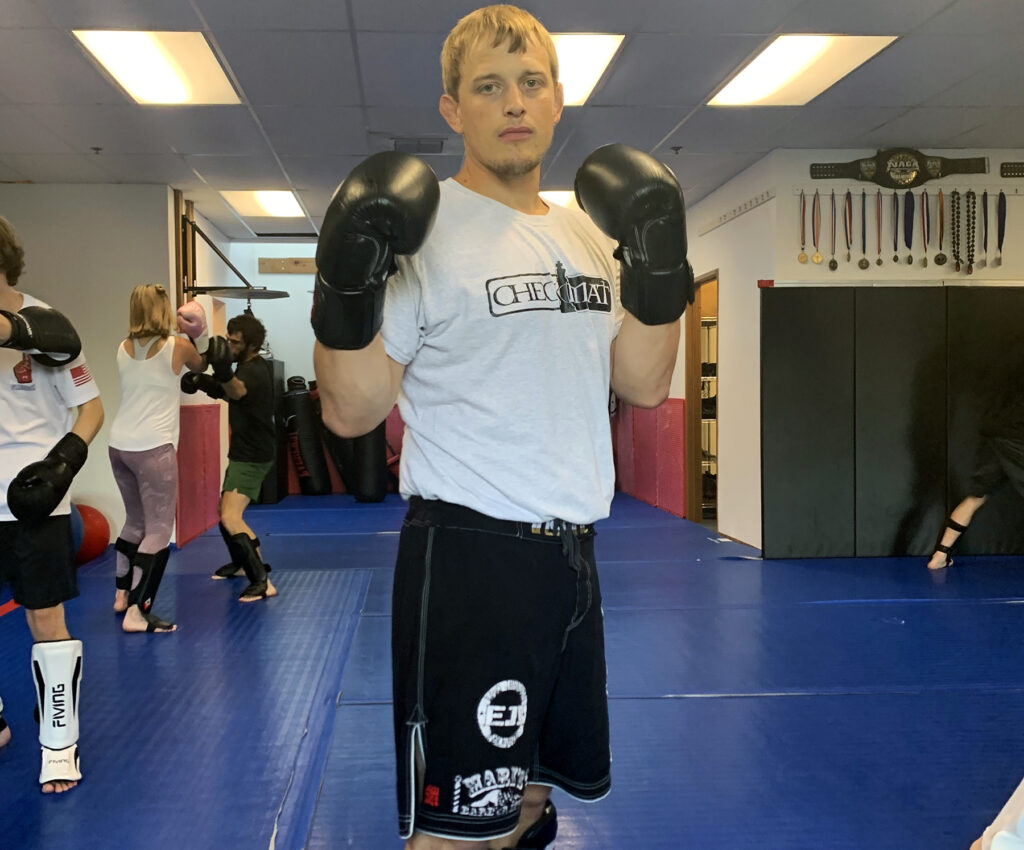 Stone calls for his pupils to glove up, with mouth pieces in and shin guards on, for sparring sessions. Students, matched up by size and ability level, eagerly test their skills against each other.

Punches and kicks are not at full speed, though. “We’re not here to hurt our teammates. We’re here to learn and emphasize the skills that are required to defend ourselves,” Stone said.

One energetic sparring matches two blue belts. Gig Harbor High School student Shelton Martinez, 17, is a veteran of one amateur fight. He is squaring off against 20-year-old former Peninsula High School student Mat Johnson, who is training for a fight in a couple weeks.

Both are pulling their punches. Yet a few land to the chin or midsection and reinforce the need for an effective defense.

Martinez is a lefty who has a long jab and some powerful kicks. He got involved in the sport following a suggestion by a brother.

“My classmates in high school don’t know about my abilities but I feel confident,” Martinez says. “Being involved here has helped me focus on my future.”

Johnson, who participates in the 135-pound weight class and is lightning-quick, has been with GHMMA for four years. He describes the sport as a huge part of his life.

“A lot of people may see this sport as kind of brutal but it is an art form to me,” he says. “It’s about timing and technique. Anyone can throw a punch, but it’s about setting up the next strike that’s important. They call it martial arts for a reason.”

The lone female in the class, Justine Bowie, has been a student for six weeks and says she’s already hooked on the sport. She also praises Stone’s teaching style.

“He’s got the karate kid vibes going on and he makes it like a family in here,” Bowie says.

Stone began working out at Gig Harbor MMA in 2010 and was immediately entranced. He was a wrestler for Peninsula High before taking a job at Puget Sound Naval Shipyard in Bremerton.

Stone methodically worked his way through white, blue, purple, brown and black belts  while studying Brazilian Jiu Jitsu under former owner Bird. He compiled a 7-1 record as a fighter before the pandemic shut down the sport.

In that time period he married a Brazilian woman named Bruna and they had their first child, a son. Facing limited opportunities to fight because of Covid, he instead focused on being an active father and attending to his business.

He admits to feeling the pull to get back into the ring but says that life is great with 130 students. He loves teaching the various aspects of MMA but is particularly interested in Jiu Jitsu. Six of his seven pro wins came by submission while using those techniques.

Brazilian Jiu Jitsu is a martial art that focuses on ground fighting and grappling as a self defense. The concept is that smaller individuals can defend themselves against a larger opponent by putting pressure on weak links.

BJJ emphasize attacking the levers of the body that do not want to bend in unnatural positions. Techniques include attacking the knees, elbows, wrists, shoulders, necks and ankles.

Other instructors at Gig Harbor MMA have also won high-level competitions. Nathan Ullevig, a heavyweight and Gig Harbor resident, won the International Brazilian Jiu Jitsu Federation World Championship in Las Vegas in 2017. He teaches the morning classes at GHMMA. Stone says he’s lucky to have someone of his caliber involved with his business.

Chris Stone takes a jab and prepares for a counter punch while sparring with one of his students at GH MMA. Dennis Browne

The MMA movement has seen an explosive rise from a fringe sport in the mid-’90s to a major player today.

In 2016, talent agency WWE-IMG bought the Ultimate Fighting Championship (or UFC) organization for $4 billion. That’s the highest price ever paid for a sports organization.

Events sell out regularly all over the globe. Top UFC matches broadcast via pay per view earn tens of millions on Saturday nights.

Washington is a hotbed for MMA talent. Spokane native Julianna Peña won a championship this spring, giving Washington six past or current world champs. Only Ohio and California have more. On a per-capita basis, Washington is number one.

Stone thinks it’s possible he could coach a future UFC fighter one day. He certainly has an experienced staff and some talented prospects. But that isn’t his ultimate goal.

The bigger picture for him involves teaching the positivity, self-respect and sense of community that comes from this demanding but rewarding sport.

“Some of our toughest and most dedicated students have never had a fight in the ring. That’s not necessary to enjoy the benefits of this sport,” he says. “Everyone that steps in here is special and this is a place where they can focus on personal improvement, both physically and mentally. That is really our top priority here.”