Fifteen years ago, I set out for a first-person report on traffic crossing the minutes-old Tacoma Narrows bridge.

At 5:20 a.m. on Monday, July 16, 2007, as I circled the Wollochet Drive on-ramp, the meter that previously had inserted vehicles into bumper-to-bumper Highway 16 had been switched off. I merged and immediately shot to 60 mph. I held speed until a lookie-loo slowdown at the toll booths. A few drivers were paying, but no lines had formed. The five miles from Wollochet to Tacoma took five minutes.

At 6:18 a.m., commuter traffic was much heavier, and despite trying out the toll booths this time, where the transponder automatically charged the $1.75 electronic rate, the trip took just 6 ½ minutes. At 7:05 a.m., it was still a drag strip.

“We’re racing at 60-plus and could go faster except there’s a sheriff’s car beside us,” I wrote. “It’s amazing how traffic seems so light when it’s actually moving.”

About 50,000 people gathered to celebrate the opening of the newest Tacoma Narrows Bridge.

Traffic was still blasting at 8 a.m. We switched to the photographer’s pickup so he could lie in the bed and snap shots. We worried that the toll taker would frown on him being back there, but Anthony just smiled for the camera, took our $3, and flashed a Good To Go! thumbs up.

So why would we want to speed back and forth across the bridges all morning, the many newcomers might ask. Well, because we could, which wasn’t previously the case.

Before the new bridge, traffic crawled in two skinny lanes in each direction, separated from head-on crashes by plastic tubes. People’s lives were changed by no longer wasting an hour in gridlock en route to work. Workers could reach daycare in time to pick up the kids.

And by paying tolls for the next 30 years.

After years of lawsuits and political sparring, followed by 4½ years of construction, four roomy, smooth lanes freed 75,000 daily drivers, or at least sprung them until the next logjam at Nalley Valley.

The previous day, animosity was suspended for a “community celebration” attended by 50,000, many of whom legged the mile-long span. Gov. Christine Gregoire and other dignitaries spoke and cut ribbons. Then they were chauffeured across in the 1923 Lincoln Touring Car that had made the first crossing of Galloping Gertie in 1940 and of Sturdy Gertie in 1950. 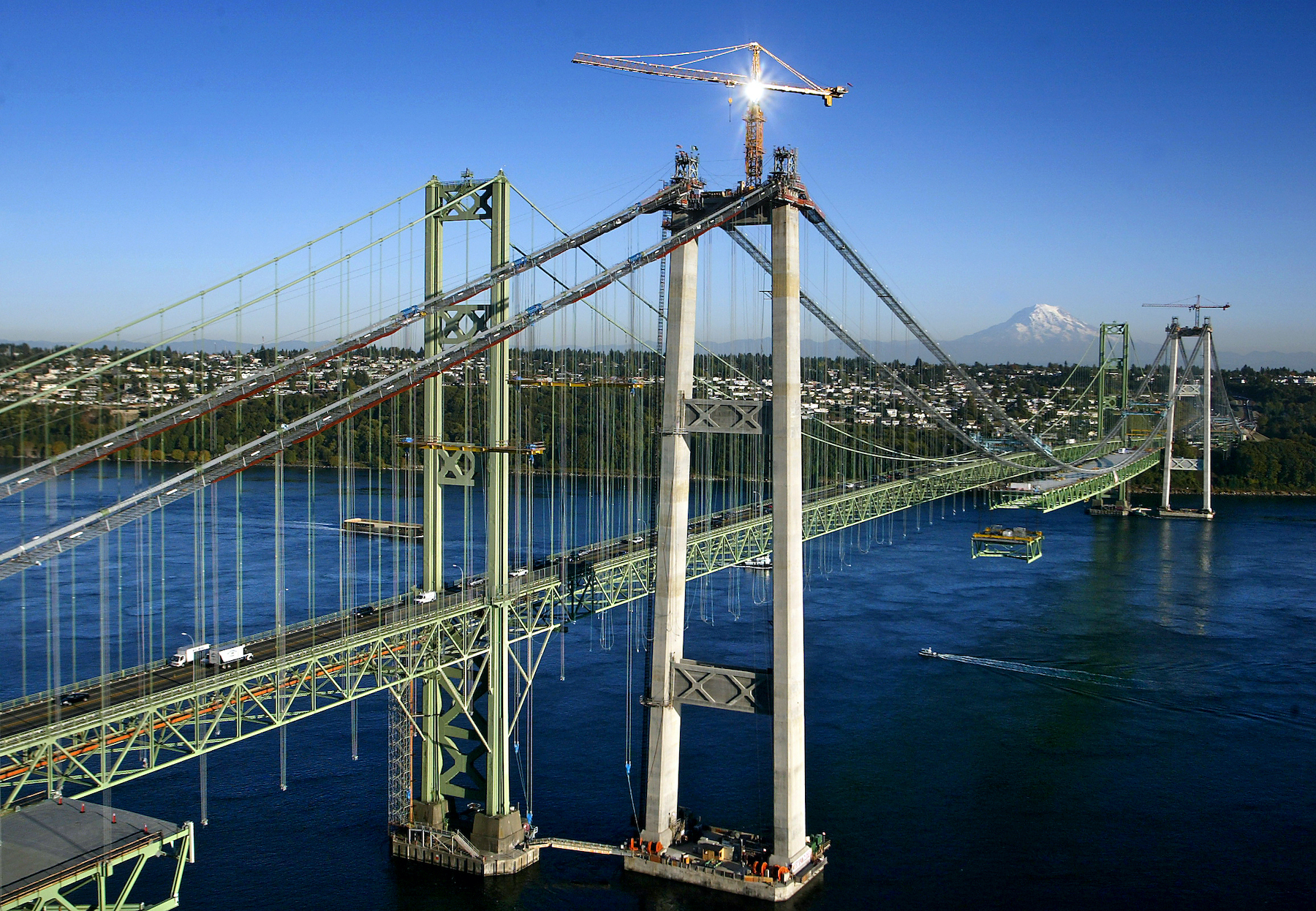 A deck section is lifted into place during the building of the new Tacoma Narrows Bridge.

It was an amazing engineering feat

Regardless of how people felt about tolls, they could not deny the new $729 million bridge was a remarkable engineering feat. It is the fifth-longest suspension bridge in the United States. It’s the longest to be built since the Verrazano-Narrows Bridge opened in New York in 1964.

Its foundations, which weigh 85,000 tons each, stand just 60 feet south of those of the 1950 bridge. The two towers are each 510 feet tall and contain 17,000 yards of concrete and 2.9 million pounds of reinforcing steel. The roadway sits on a steel truss that was imported in 43 sections from South Korea.

It is suspended from vertical hangers that descend from two 20.5-inch-wide main cables, one on each side. The cables arch to the shore, where they’re hitched to massive concrete anchorages.

Tacoma Narrows Constructors (a joint venture with Bechtel Infrastructure and Kiewit Construction) worked around the clock amid gusty winds and swift currents rushing through the Narrows to complete the project on schedule. Nobody was killed during construction, unlike on its predecessors, and only three injuries required time off.

The public wanted the second bridge to look like the existing one. But because it was built with less-expensive concrete instead of steel, that wasn’t possible. The bridge towers were designed to incorporate recessed dual-X bracing on the three cross struts to mimic the existing bridge’s most distinctive feature.

The public also preferred to keep the colors similar. The builders, however, believed painting it the same dark green would overwhelm and distract from the existing bridge’s character. They recommended that the steel sections — such as cables, suspenders and trusses — be painted a lighter hue of green and that the towers be a concrete gray to defer attention to the old bridge.

Gig Harbor and South Kitsap residents stood to benefit most from the bridge. Yet they were most opposed to it because it would be funded entirely by tolls, the majority of which would come out of their pockets, and no-growthers feared it would spur development of their fishing village. And it did, whether good, bad or both.

A 1998 advisory election gained 53 percent approval from a far-flung, seven-county region. But 83 percent in the Gig Harbor area voted against it.

Transportation Secretary Sid Morrison interpreted the narrow margin as approval for using corporate bonds to finance the new bridge, which then had a preliminary price tag of $350 million. Opponents of using private funds contended that the vote would have failed had the boundaries been reduced.

Local bridge foes filed several lawsuits, including one that went all the way to the state Supreme Court and appeared to have stopped the project in November 2000.

The court unanimously concurred with Peninsula Neighborhood Association that an agreement between the state and private company United Infrastructure was at odds with a 1961 state law. The deal governed the design, building and operation of a second bridge.

That law required the existing bridge to remain toll-free after it was paid off in 1965. The neighborhood group’s victory was short-lived, however. The Legislature simply repealed the law and the project continued.

Tolls started out at $1.75 for those who stuck electronic transponders to their windshields and therefore could bypass the toll booths, and $3 for those who did not. Originally the plan was for everybody to pay $3. The state offered the deal as an incentive. It feared toll booth lines would back way up onto the highway.

It also served as an unofficial frequent-user discount. The very first day, 73 percent of bridge crossers had transponders, and the percentage has grown since then.

The rates have been raised several times. They now stand at $5.25 with transponders, $6.25 at the toll booths and $7.25 by mail. A bill passed in March will reduce them by 75 cents where they will remain until the bridge is paid off in 2032.