Posted on September 8th, 2022 By: Ed Friedrich
Share this article:

Salmon don’t care whose culvert is blocking them. All they want is to swim upstream to spawn.

But Pierce County and the state, each responsible for multiple barriers on Purdy Creek, must collaborate to give the largest number of fish the widest access to the 6.5-mile stream.

State Department of Transportation contractors will embark this month on a yearlong fish passage project on the Highway 302 Spur in Purdy. Crews will swap out an old concrete box culvert for a 77-foot bridge where the creek goes under the highway and empties into Burley Lagoon.

The state Fish and Wildlife Department says 33 percent of fish are obstructed there because of low stream depth and high flow rate. (The agency grades culverts 0%, 33%, 67% or 100% passable.)

“In most years, most adult salmon have been able to pass through this culvert,” depending on timing and rainfall, said Pierce County spokeswoman Akiko Oda.

Meanwhile, at a county road nearby …

Just 110 yards upstream, however, salmon confront a 320-foot-long system of county culverts that extend under a Chevron gas station and 144th Street. That culvert blocks 67% of fish, according to Fish and Wildlife, also because of fast and shallow water.

Though springing salmon for such a short distance might not appear to be good planning or the best use of funds, the state and county intend to open the entire creek. It just won’t happen concurrently. 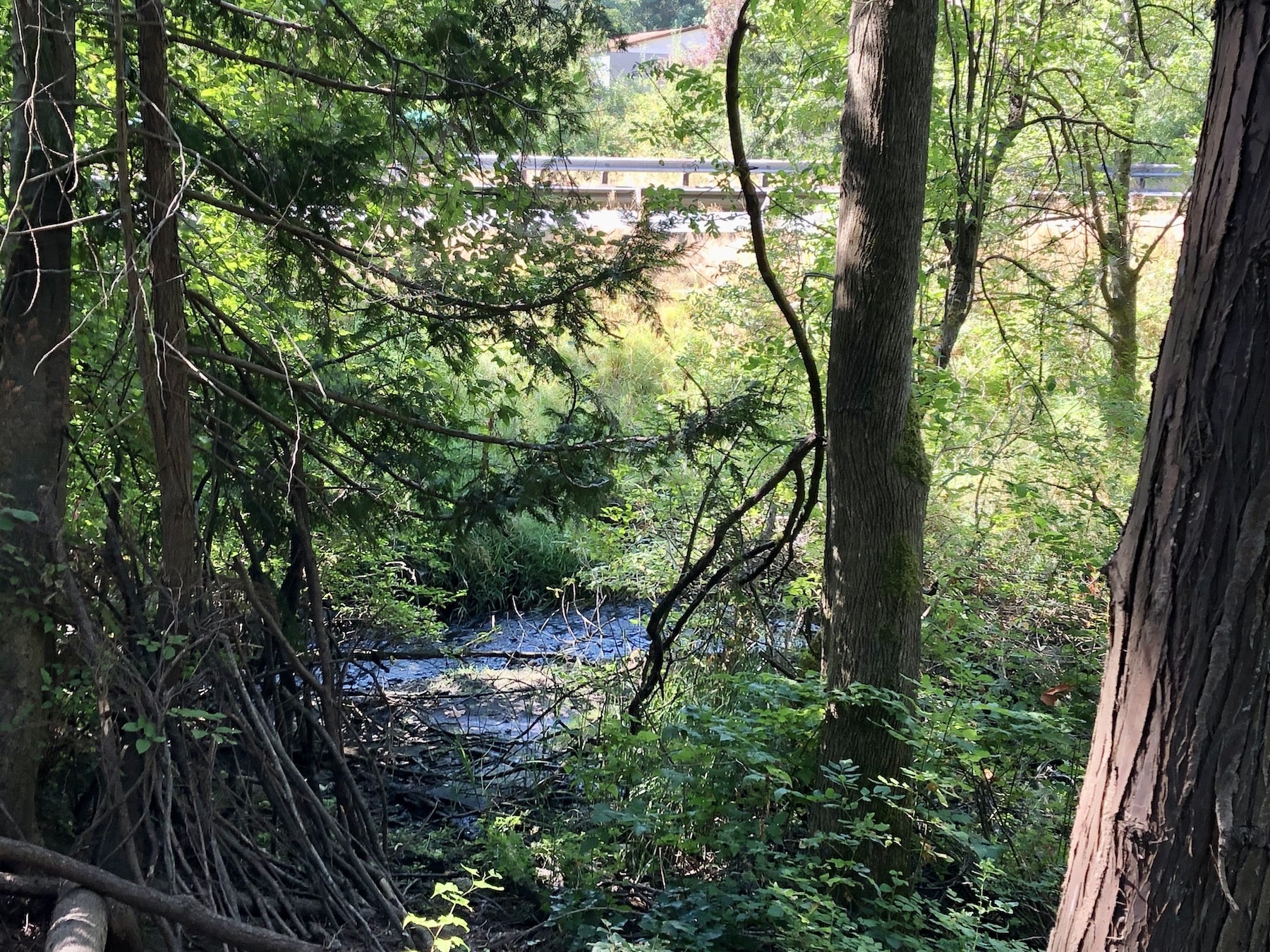 After replacement of the Highway 302 Spur culvert, all fish will be able to enter the open creek until they reach a county culvert system under the Chevron gas station.

In May 2018, they completed a joint study of the lower Purdy Creek barriers, said Kim Mueller, fish passage delivery manager with the state Department of Transportation. The intent was that the state design would mesh with the county fix even if funding didn’t align.

“WSDOT is committed to communicating our delivery plan as early as possible to coordinate with other fish barrier owners like cities and counties,” Mueller said in an email. “In the case of Purdy Creek, WSDOT has been coordinating our efforts with Pierce County throughout the development of the project.”

Funding didn’t align. The state will soon begin replacing not one but three Purdy Creek obstructions. The county remains in the feasibility phase. Besides the Highway 302 Spur culvert, the state is replacing 6-foot corrugated steel pipes under Highway 16 with 206-foot-long bridges.

Only 33% of fish make it past the 320-foot-long system of county culverts that extend under a Chevron gas station and 144th Street, according to the state Department of Fish and Wildlife. These pipes are at the 144th Street end.

Workers have begun preparing the site for westbound construction that will continue until next summer. Eastbound work will occur from next summer through the summer of 2024. Fish and Wildlife says the eastbound culvert is 67% passable and westbound 33%. The combined cost of the three projects is $41.6 million.

“The State Route 302 and State Route 16 Purdy Creek culverts are a high priority to WSDOT since they improve access to a high amount of habitat (nearly 6 miles), they are geographically close together and the project is ready to deliver with a design that is forward compatible with the county’s future barrier correction project,” Mueller said.

Buying and removing this gas station and exposing Purdy Creek is among the alternatives that were considered in a study.

Purdy Lane is a side road that runs parallel to the 302 Spur from the Peninsula High School entrance to 144th Street. The creek flows between the two streets. Along Purdy Lane are a few small businesses, including SAVE Thrift Store and The Tax Shack.

The county is designing another Purdy Creek culvert replacement at 160th Street, a dead end road along the Kitsap County line that it co-owns with Kitsap, said Oda. A dropoff from the 4-foot concrete pipe’s outlet to the stream prevents 67% of fish from passing, according to Fish & Wildlife. The preliminary project cost estimate, including design and construction, is between $1.5 million to $3 million.

The county can’t match the state’s funding nor its legal incentive. Its 2022-23 biennial budget provides $6.6 million for fish passage efforts. That’s enough for one or two projects per year, Oda said. The money comes from state grants and surface water management utility funds.

Pierce County is designing a replacement for this culvert under 160th Street on the Pierce-Kitsap County line.

That the state projects are now under construction could boost the county’s grant opportunities.

“We partner with other barrier owners when our funding sources align, though there are opportunities to coordinate even if funding sources don’t align,” said Mueller. “For example, a fish barrier on a stream with recently corrected barriers will rank high with grant funds such as the Brian Abbott Fish Barrier Removal Board. This helps coordinate work throughout watersheds despite different barrier ownership.”

Besides much more money, the state has greater motivation than the county. A 2013 federal court injunction requires it to speed up its fish passage work in Western Washington. It must restore access to 90% of blocked habitat by 2030.

The state has 3,976 highway crossings on fish-bearing waters. Of those, 2,083 are fish passage barriers, including 1,538 that block more than 200 meters of upstream habitat. To date, it has completed 379 fish passage barrier corrections, providing access to about 1,301 miles of potential habitat.

Purdy Creek flows into Burley Lagoon through a culvert not visible at top of photo.

The Transportation Department completed 15 culvert projects in 2021, restoring access to 98.2 miles of potential upstream habitat. It plans to finish 14 more this year to add about 29.6 miles.

The county is evaluating which of its 750 culverts are blocking fish, an effort it expects to complete in 2023. A prioritization strategy and priority list are expected to be developed within five years, Oda said.