Volunteers go to war with English Ivy along Nelyaly Creek

Posted on September 12th, 2022 By: Vince Dice
Share this article:

Andy Sharp shut off the chainsaw he was using to cut swaths of an invasive plant off a deciduous tree at his property near the corner of 82nd Ave NW and 92nd St. NW.

“This tree’s already dead,” Sharp said. The suspected cause of death: English Ivy.

Sharp, along with volunteers from Friends of Pierce County, were at the property on Saturday, Sept. 10, in hopes of preventing the death of more trees in an important salmon habitat.

But it almost didn’t work out that way.

Before Sharp purchased the land in 2021, a previous owner had big plans for it. At one point, the previous owner told Sharp he wanted to put five homes on the property, which slopes down to the cove and the mouth of Nelyaly Creek.

Friends of Pierce County, the Wild Fish Conservancy and others put up a fight. They filed objections to the property owner’s plans to remove trees and his request for a variance to shoreline buffer regulations.

A letter from the Wild Fish Conservancy to the Pierce County Hearing Examiner in January 2020 called Nelyaly Creek “one of the largest intact salmon streams on the Gig Harbor Peninsula.”

This image from the Pierce County Assessor’s Office’s parcel map shows the location of the property at the corner of 82nd Ave. NW and 92nd St. NW. An adjacent PenMet-owned property is highlighted in green.

“This property is uniquely undeveloped relative to others in the Gig Harbor Peninsula and is an excellent example of intact estuarine habitat deserving of a complete, un-compromised buffer,” the letter continues.

The Florida-based property owner eventually backed off the project and sold the property to Sharp, who already owned an adjacent 1-acre plot.

Why is this property important?

Andy Sharp talks with volunteers at the Nelyaly Cove shoreline. The property he purchased, with the intention of conserving it, extends on both sides of the cove. Vince Dice

Places like Nelyaly Cove and the mouth of the creek provide a sort of “rest stop” on salmons’ trip between their native streams and the ocean.

“It’s one of the largest parcels (in the area) that is still intact, doesn’t have impervious surfaces on it or is clearcut,” said Friends of Pierce County Executive Director Marian Berejikian. “The fact that it still has a lot of vegetation  and it borders Puget Sound and the creek, we thought it important to protect that.”

It’s beautiful, too. The property spans both sides of Nelyaly Cove, fully wooded in a near-natural state. A bear is said to frequent the plot. A family of beavers lives there. Some have even reported seeing a cougar.

The cove is popular with canoeists and kayakers, among them the property’s new owner.

Sharp’s canoe was pulled up on shore during Saturday’s cleanup event, with paddles propped up on a tree nearby.

It was low tide, and the cove was mostly a mudflat at that moment. But when the tide is higher, Sharp said he often sees people paddling in to get a glimpse of an undeveloped property that doesn’t look too much different than it would have a century or two ago.

“It’s so magic when the tide is in. It’s like ‘The Wind in the Willows.’ It’s just magic,” Sharp said. “I feel so privileged to own it.”

Why ivy is a problem

On Saturday, that privilege added up to a lot of hard work on a hot day with poor air quality. The English Ivy infestation at the property long predates Sharp’s ownership, but it’s his problem now.

Most of the trees on the east side of the cove are covered with English Ivy, an invasive species that isn’t easy to get rid of.

English Ivy grows so densely on the trees at the 82nd Street property that the trees themselves are completely obscured. Vince Dice

Sharp and the FOPC volunteers wielded an assortment of chainsaws, loppers and pole saws in the first step toward eradicating it. A tractor stood by to drag away the vines, many as thick as a person’s arm.

So what’s the problem with the ivy?

“The ivy takes over, almost like a parasite,” Berejikian said.

The ivy weighs down the trees and deprives them of both light and water. The trees eventually die. And that’s bad for fish in several ways.

Lack of trees increases sediment runoff into the creek. Equally important, the trees provide shade for the creek and contribute to a food source.

Falling leaves draw bugs down to the water. Juvenile salmon eat those bugs.

Saturday’s cleanup was by no means the end of the effort to get rid of the English Ivy. It was barely a start.

Lucinda Wingard, who was among the volunteers working Saturday, estimated it will take 5 years to eradicate the ivy. That’s how widespread it is.

“It’s one of the worst places I’ve seen with ivy,” Berejikian said.

The thick vines wrap repeatedly around tree trunks. They also cover the floor of the forest as it slopes down toward the cove. Several dead trees were identified during the project. 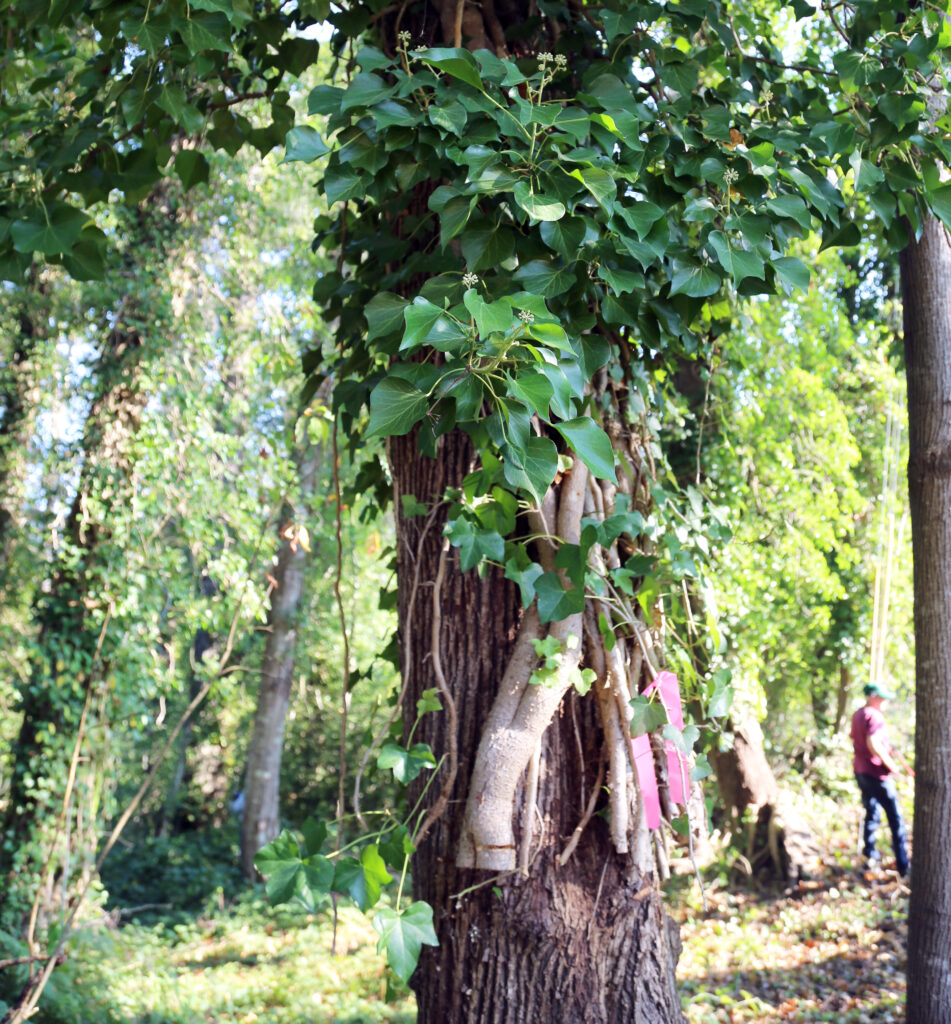 The English Ivy vines were cut a few feet off the ground. They don’t die right away, but according to the state noxious weed control board they will eventually. Vince Dice

Even cutting swaths of several feet out of the vines wouldn’t kill the stuff, at least not immediately.

Sharp cut long portions out of vines on some trees months ago. The vines above his cuts were still green and appeared to be alive on Saturday.

They’ll die eventually, according to the Washington State Noxious Weed Control Board.

“It will take some time but the leaves on the cut stems still in the trees will slowly die and fall off,” according to information on the board’s website.

In the meantime, the work conducted Saturday gives the trees bordering Nelyaly Cove and Nelyaly Creek a better chance at survival. Dead ivy weighs less, so the trees won’t be pulled down. And the host trees will get more sunlight.

More work parties are planned for the site this fall and next spring.

A Friends of Pierce County volunteer pulls invasive English Ivy off a tree at the property along Nelyaly Cove. Vince Dice