The walls inside the apparatus bay at Gig Harbor Fire and Medic One’s Station 58 on Bujacich Road tell a story.

The cinder-block walls inside the poorly-ventilated garage are stained from more than 30 years’ worth of diesel exhaust from fire and aid vehicles. This despite the best efforts of generations of firefighters to scrub them down.

It doesn’t look great. But the aesthetics are the least of Fire Chief Dennis Doan’s concerns. The lack of proper ventilation poses a grave health risk for firefighters. 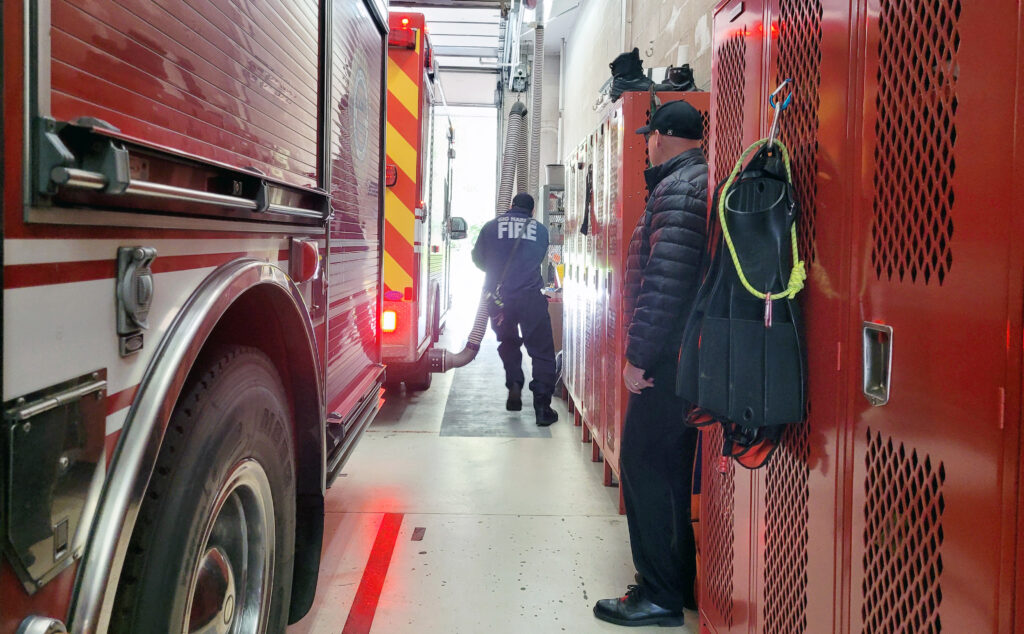 Gig Harbor Fire and Medic One Chief Dennis Doan looks on as a fire crew prepares to respond to a call inside the narrow apparatus bay at Station 58. Vince Dice

Cancer is the leading cause of line-of-duty death among firefighters, according to the International Association of Fire Fighters. Daily exposure to diesel exhaust inside fire stations is a significant contributor.

“Analysis of the kitchen, bunkroom walls and furniture in firehouses reveal a tremendous amount of diesel exhaust particles. These dangerous particles are inhaled and absorbed every shift and cause significant harm to fire fighters,” according to the IAFF and the American Cancer Society.

Board moves ahead with bond

Doan and others at Gig Harbor Fire and Medic One say the situation for local firefighters will be safer if voters approve a 20-year facilities bond in August.

Jake Flick, president of the Gig Harbor Professional Firefighters Local 3390, told Tuesday’s commission meeting that the union believes the bond is “incredibly necessary and important, as well. Retrofitting (facilities) for a diverse and cancer-free workplace is something all firefighters should want.”

Fire Commissioner Joe Urvina said he was “a little embarrassed” the first time he saw the age and condition of the district’s facilities.

“Our firefighters deserve better,” Urvina said before Tuesday’s vote. “It’s time for us to step up and deliver.”

To pass, the bond must receive support from at least 60 percent of those casting ballots in the Aug. 2 election.

Most of Gig Harbor Fire’s current facilities were built after a voter-approved bond in the 1980s, Doan told fire commissioners at a previous meeting. That was the last time the district had a bond approved by voters.

The bond proposal is based on a capital facilities plan approved by fire commissioners last winter. All together, the projects in the facilities plan would cost a projected $118 million. The bond is for no more than $80 million.

If approved by voters, work on the projects is expected to begin in February 2024 and continue at least into 2031.

The safety issues posed by poor ventilation and lack of decontamination facilities are not just theoretical for GHFMO staff members.

A Gig Harbor firefighter is currently being treated for cancer that was determined by the state Department of Labor and Industries to be job-related, Doan said during a recent tour of Station 58.

Numerous studies have shown that cancer rates are significantly higher for firefighters than the general public and that fire fighters in the U.S. and Canada are developing job-related cancers at a rate higher than ever, according to information from the IAFF. 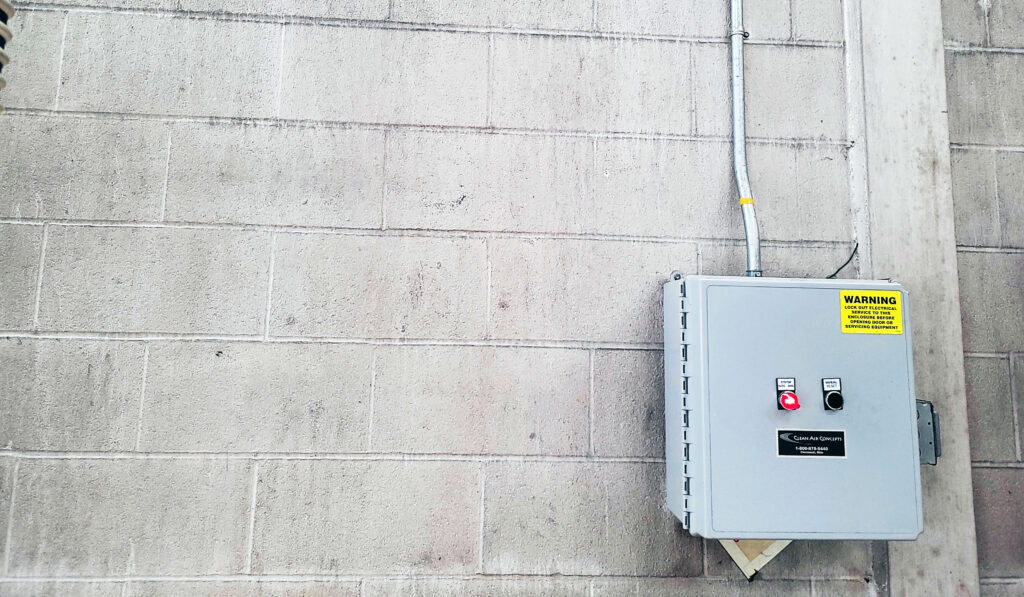 Despite firefighters’ best cleaning efforts, the walls of the apparatus bay at Station 58 are discolored from years of vehicle exhaust inside the poorly ventilated space. Vince Dice

In addition to improved ventilation in the apparatus bay, space would be added to allow firefighters to clean gear worn during fire calls. Gear would be stored there, too, keeping potential contaminants away from where firefighters live and sleep.

“Back when I got hired, we’d put (gear) next to our bunk,” Doan said. “It was almost a badge of honor to have smoke or soot all over your turnouts.  We’ve learned over the years, it needs to be decontaminated immediately.”

The new space also would include an area to decontaminate gear that comes into contact with blood-borne pathogens.

“We need to create areas to keep (pathogens and cancer carcinogens) out of our living areas and our fire stations,” Doan said.

Gig Harbor Fire’s stations were built to serve a very different department than what now exists.

Doan pointed out that the current stations were built for what was then a predominantly volunteer department. The district now employs 118 career firefighters.

What are some of the deficiencies?

At Station 58, the locker room is located in what used to be the station’s lobby. Firefighter sleeping quarters are cramped and claustrophobic. An oft-patched roof continues to spring leaks. 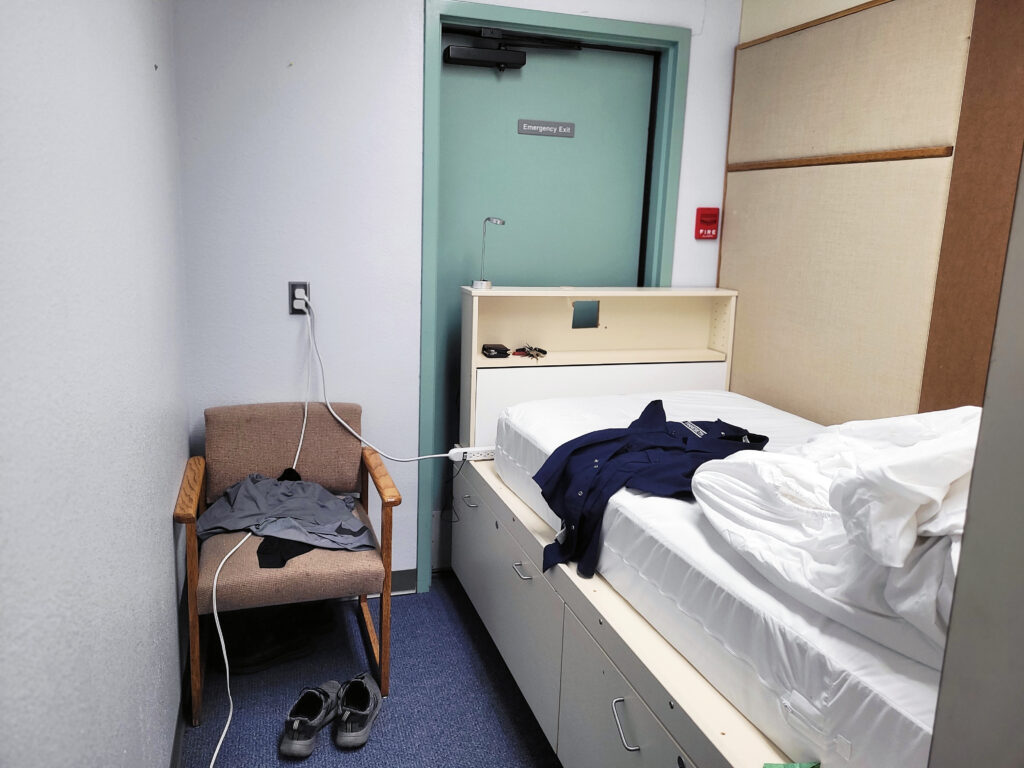 The stations weren’t built for an era when employees need to be able to access computers. Fire crew officers don’t have their own office space for meetings with crewmembers.

And the stations were not necessarily built to accommodate both men and women serving on fire crews. “We really need to focus on a more diversified workforce,” Doan said.

The bond proposal also calls for a new fire training facility and for a rebuilt Station 51.

Getting recruits into a training academy can also be challenging. Gig Harbor works with University Place-based West Pierce Fire & Rescue and others for fire academy, but that means local firefighters can only be trained on another agency’s schedule.

“We don’t have a training facility here on the peninsula,” Doan said. Building one in Gig Harbor “would improve our firefighter safety and our community safety.” 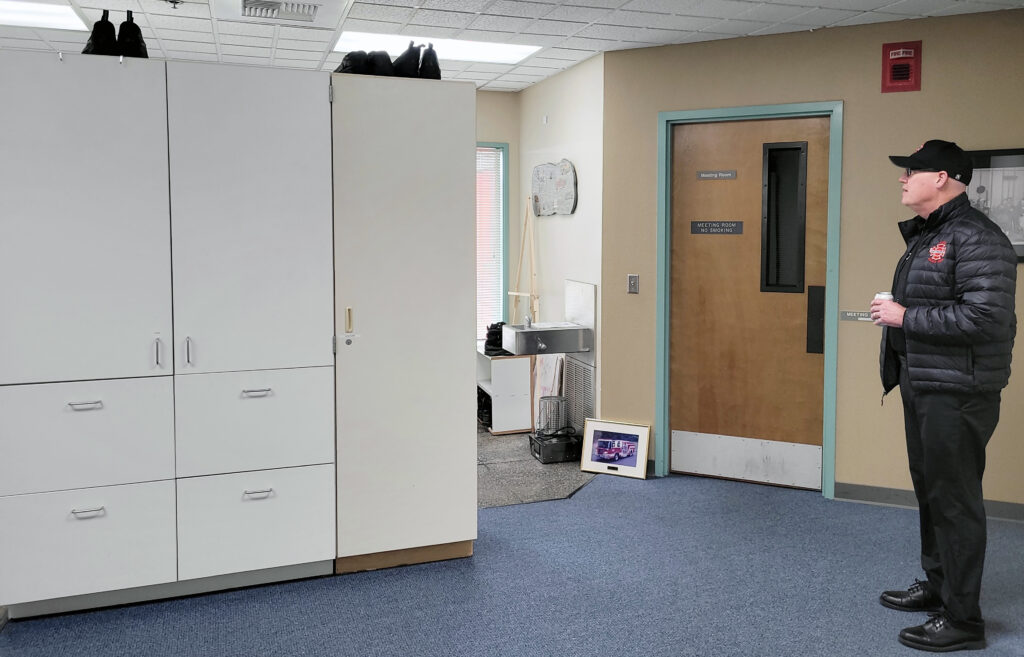 Gig Harbor Fire and Medic One Chief Dennis Doan shows what passes for a locker room at Station 58. The lockers are located in what used to be the station’s lobby, with blinds covering windows and doors. Vince Dice

Replacing Station 51 would be the most expensive project paid for by the bond. A new Station 51 is projected to cost more than $20 million, not including an $8 million logistics building planned for the same property.

Consultants who helped author the district’s capital facility plan said that’s still the most cost-effective option. The station was built in 1976 and has already been renovated three times, most recently in 2000.

“While every effort was made to find an economical approach to remodeling the existing station it was deemed too difficult and not cost effective to do so,” according to the report, prepared by Bremerton-based architectural firm Rice Fergus Miller.

The new Station 51 would be built on the same location as the existing one, on Kimball Road. 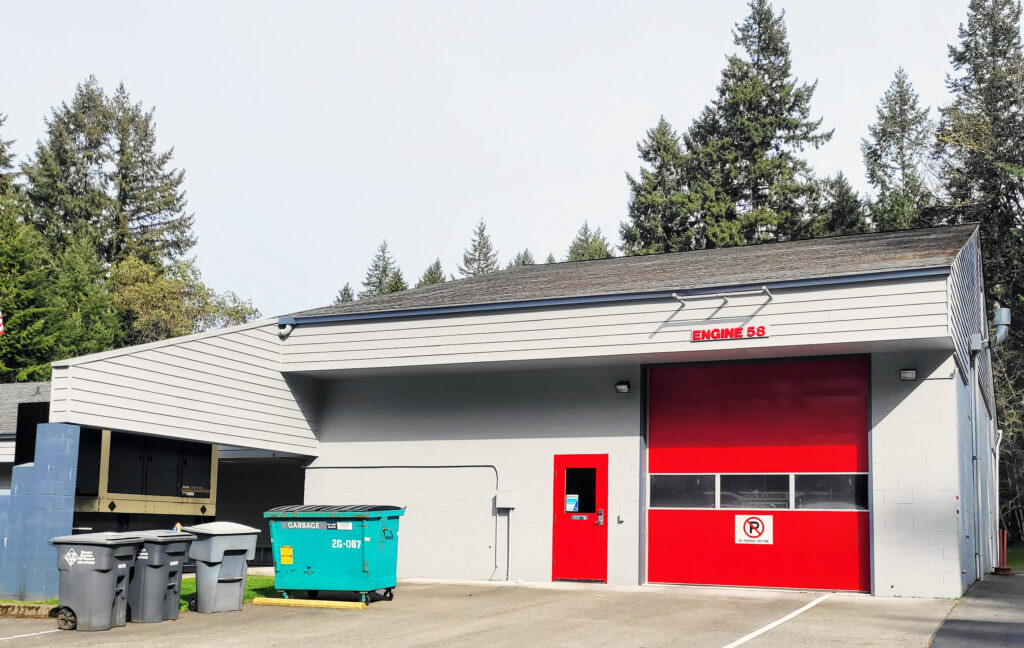 Additional space would be added on to the apparatus bay at Gig Harbor Fire and Medic One’s Station 58. Vince Dice