Catching kings with the Krilich Killer

Posted on August 24th, 2022 By: Dennis Browne
Share this article:

Gig Harbor resident Jason Krilich picks me up at the Gig Harbor dock with a smile and a friendly “welcome aboard.”

We have planned our trip for a beautiful, 78-degree Sunday afternoon. We’re fishing the outgoing tide, trying to catch the coveted king salmon.

Krilich, 52, has fished these waters since he was a boy. He and his grandfather, the late fishing legend Ned Krilich Sr., spent countless days and early mornings on the water.

The legend of Ned Krilich

Ned fished from the clay banks in Tacoma to the head waters of the Nisqually River and from the tip of Fox Island to the mouth of the Harbor.

Ned Krilich was born in 1910 in what would later become Yugoslavia. He immigrated to America in 1911, worked in a logging camp near Mt. Rainier and later fished commercially.

He then worked for the state parks department, including at Dash Point State Park in Federal Way from 1960 until his retirement.

Ned Krillich Sr. was the manager of Dash Point State Park, a committee member of the Tacoma Parks Dept. and the President of the Washington Sportsman Council on Salmon Fisheries. Courtesy Jason Krilich

Ned Krilich was one of the first fisherman to chart the bottom of the Puget Sound in the Tacoma and Gig Harbor area, using a sounding line to discover the topography below. Knowledge of channels, valleys and shelves are key to catching salmon in the sound.

Anglers who understand both the undulations of the floor and the timing of incoming or outgoing tides can determine where and when to fish. Bait fish tend to swim in balls for protection from predators. Strong tides can cause them to be pushed or pulled over those shelves or ridges.

Hungry salmon feed voraciously on herring. So knowing topography and tides allows fishermen to drop their lures to the correct spot where a king salmon will bite.

Ned developed a reputation for using his knowledge to catch big fish. He caught a 52-pound king and several others near that size. Word traveled fast that the crafty park ranger had the floor around Point Defiance charted.

His son, Ned B. Krilich Jr., is now 81. He still goes to Alaska to fish and can be found fishing from his kayak in Carr Inlet. Krilich Jr. vividly remembers fishermen following his father around in a not-so-discreet line to fish his hot spots.

Given the attention he generated on the water, Ned Sr. decided to sell his favorite lure after receiving a patent in 1951. He named it the Krilich Killer.

The white Alaskan cedar lure with a red slash at one end resembled a wounded herring. It was cut at an angle, causing a spin that would entice fish to strike as he trolled in his boat from above.

“Mom and Dad did most of the work, but I helped sometimes by tying on the hooks, stamping the cards, and putting them in the packaging with the plugs,” Ned Jr. says.

Jason remembers going out on the water with his grandfather and tossing the Krilich Killer to eager fishermen, who returned dollar bills, three at a time.

“My grandfather would stuff the bills in my shirt pocket while out on the water because I would often help him make them in his garage,” Jason Krilich says. Then he laughs and adds: “One summer, I remember having over 200 $1 bills. I thought I was rich! He was so kind to me.”

The Krillich Killer lure was manufactured “by a fisherman for fishermen” and came with its own set of directions, selling for $3 dollars a piece before live herring were available. Dennis Browne

He still has some of Ned’s lures and attaches them to our lines as we pass through Colvos Passage. We are on our way to Washington Department of Fish and Wildlife’s Marine Area 10, north of Southworth. The state had recently eliminated Sunday fishing in Area 11, around Gig Harbor and Tacoma, to help conserve king salmon in the South Puget Sound.

Once in position — between the Southworth Ferry Terminal and the southern tip of Blake Island — the sonar from the fish finder locates the fish. Cell phone apps show the charted sea floor below.

Fish are spotted at 110 feet. It is time to attach the line to down riggers, which use a weighted ball to bring the Krilich Killer to the proper depth.

We are using Okuma reels with 8-foot Lamiglas poles and 30-pound braided line that would be strong enough to pull in a king.

Kings, aka Chinook, are renowned for their fight. When they bite, they rule the first 5 to 10 minutes of the battle by plunging deep into their waters, trying to either snap a line that is too tight or spit out a hook from a line that is too loose. The fisherman gains the advantage once the chinook starts to tire.

Many experienced fishermen have felt the premature thrill of hooking a king, only to reel in a broken line. That broken line is an often overlooked aspect of fishing. 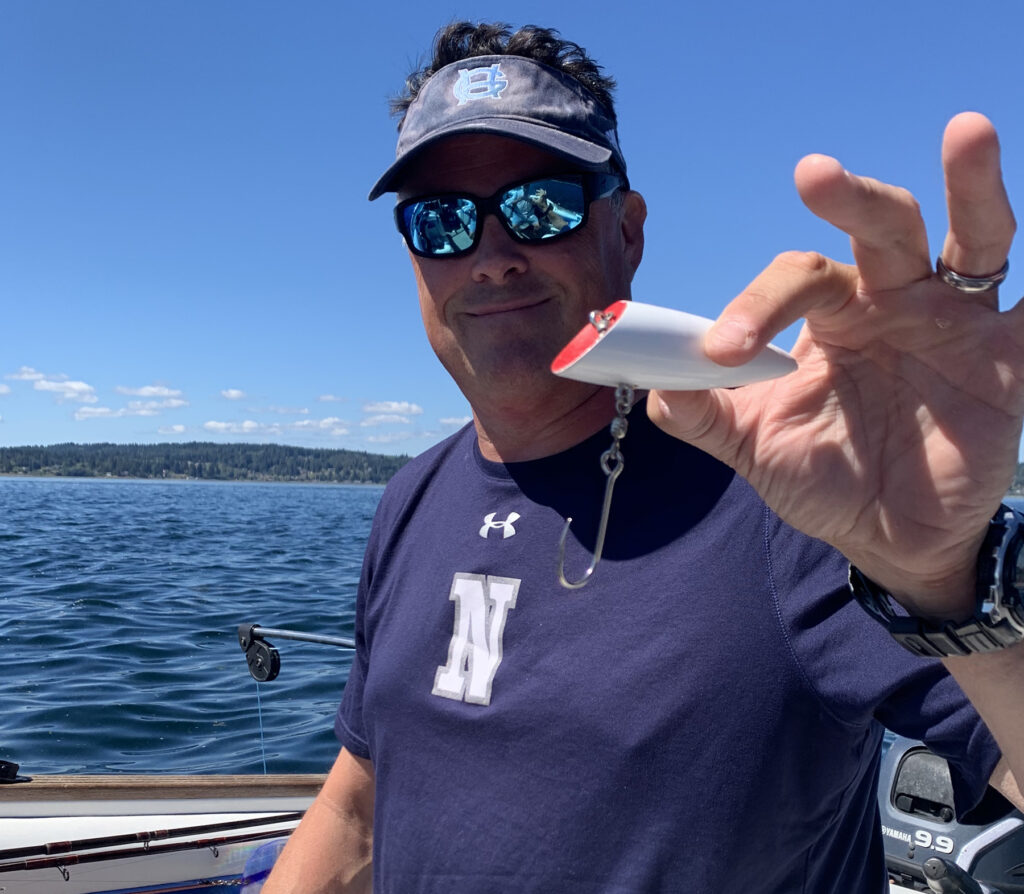 As they retie their lures and franticly toss them back into the water after missing a fish, it’s evident that fishermen are the ones who are hooked.

That exact scenario happened on this trip when our pole was suddenly pulled straight down. Krilich pointed toward the handle and yelled the best two words heard on the water: “Fish on!”

The fish was on for a few seconds before escaping the hook and vanishing into the deep. I was left to sit quietly dejected. But fishing is a unique, live experience against powerful, worthy opponents without any guarantees of success.

It became apparent that the king salmon had won the day. We decided to head back to the Harbor and agreed to try again in Area 11 in a few days.

Krilich knew of several spots where the kings should be running near Gig Harbor. “Don’t worry, amigo, we will get them then,” he said.

In a few days he returned with the fourth Krilich generation that enjoys the sport. His 15-year-old son Cole was added to the crew and proved to be exactly what the boat needed.

The Krilichs are a family whose generational bonds are evident and the time they spend fishing together goes beyond fishing. The smiles and laughter shared between Jason and Cole — on the same waters where Ned Sr. and Ned Jr. did the same — are priceless.

Their knowledge and ability to work together to catch salmon is also something they share. The duo cruised the coastline, trolling with Krilich Killers off Narrows Park. Twice the pole was hit like thunder as large kings attacked their lures.

This time, the hooks remained as the Chinook plunged for the depths, stripping off line as they went. The father-and-son combination fended off the initial runs and began to turn the fish back to the boats direction.

Jason and Cole Krilich show off one of the two king salmon caught in front of Narrows Park in Gig Harbor. Dennis Browne

Cole proved to be the winner, as he reeled in a healthy 18-pound king salmon. Thirty minutes later another beauty was reeled in as well, to their delight.

Jason reaches down in the water and secures the fish in the net. Their celebration could be heard all over the water and up into the blue sky.

One could almost hear Ned Sr., who started it all, shouting back congratulations.