Posted on September 2nd, 2022 By: Dennis Browne
Share this article:

The Peninsula football team opened the 2022 season against the Enumclaw Hornets in a wild, back-and-forth thriller.

The game had a little bit of everything and wasn’t decided until the final minute. The Hornets escaped Roy Anderson Field with a hard fought 29-27 victory.

The Hornets took the opening kickoff and began the game running behind their physical offensive line. Enumclaw running back Emmit Otero ripped off consecutive 20-yard gains before the 5-minute opening drive stalled and the Hornets took a 3-0 lead with a short field goal. 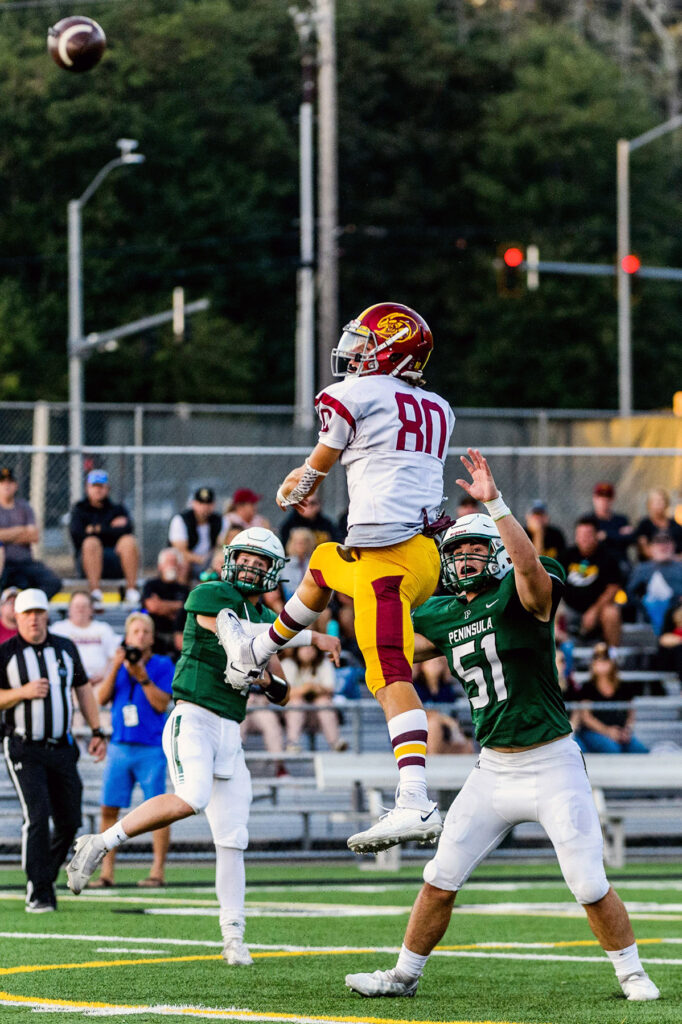 Payton Knowles gets off a throw under pressure from an Enumclaw defender in the Seahawks’ 29-27 loss on Thursday, Sept. 1, at Roy Anderson Field. Bryce Carithers

On the ensuing kickoff, Peninsula’s Isaac Smith raced 95 yards to the end zone, using an explosive spin move to beat a would-be tackler.

Enumclaw responded with Otero plunging in from the 2-yard line, upping the Hornets’ rushing total on their first two drives to 92 yards. Peninsula blocked the extra point attempt, leaving Enumclaw with a 9-7 lead.

After trading a few empty possessions, Enumclaw extended its lead to 16-7 following a 98-yard drive that ended with a touchdown reception by the Hornets’ Austin Paulson.

Peninsula turned to its passing game to get back in the contest. Seahawks quarterback Payton Knowles hit Brady Laybourn for a 12-yard touchdown to make the halftime score 16-14.

Laybourn gives the Seahawks a weapon who can run and catch out of the backfield. He is coming off a knee injury but looks as quick as ever.

“That is something I worked on every day during the off-season, becoming a threat in both the ground game and the passing game,” he said. “My coach (Ross Filkins) asks me every single day, ‘What’s your best ability?’ And the answer is availability, every single time.”

Enumclaw extended the lead in the third quarter on a Gunnar Trachte-to-Paulson TD. The Hornets appeared to be in control in the fourth quarter, claiming a 29-14 lead on a 2-yard Otero run.

But if you have watched Peninsula play football over the years, you know the Seahawks don’t quit. 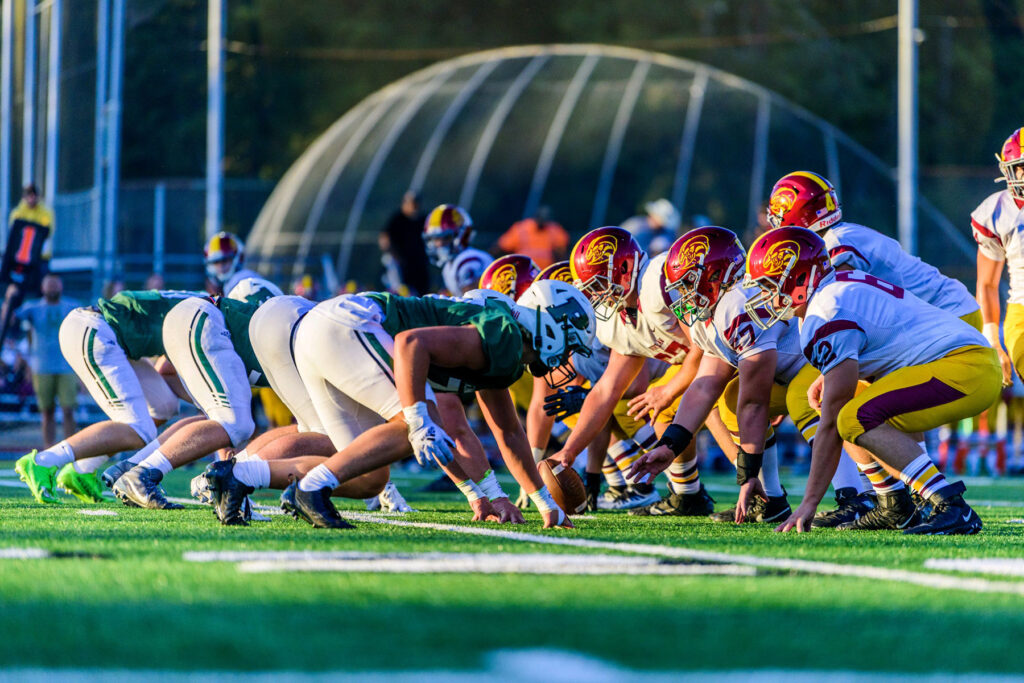 They went back to the up-tempo passing game and used the width of the field for first downs. Knowles showed his athleticism by rolling out to extend plays and Dane Meddaugh caught two rockets from him. The Seahawks were moving down the field quickly.

They survived a fourth-and-2 with an outside run by Conner Burton. Knowles darted up the sideline for 10 more before Meddaugh ran a quick slant and made a clutch catch for a touchdown. The extra point was good and the Seahawks were back in it again at 29-21 with a little over 4 minutes to go.

Filkins called for an onside kick and Laybourn hit a perfect two-hopper. The ball bounced off a Hornets’ knee and Peninsula recovered.

Knowles missed a sure touchdown by overthrowing a wide-open receiver, but made up for it on the next play, hitting Laybourn for a first down on fourth and 10.

Then Meddaugh executed a perfect stop-and-go route, which the cornerback jumped when Knowles made a nice pump fake. The 25-yard pass hit Meddaugh in stride for Knowles’ third touchdown pass of the evening.

The Seahawks went for a potentially game-tying 2-point conversion. Knowles rolled to his left, but his pass to the back of the end zone was tipped with 2:18 remaining.

Peninsula tried another onside kick, but the Hornets recovered this one. A few plays later, Otero gained a tough 2 yards on fourth and 1 to secure the 29-27 victory.

The Seahawks’ four turnovers — three fumbles and an interception — proved too much to overcome in the team’s season opener.

Isaac Smith returned a kick 95 yards for a touchdown on Peninsula’s first possession of the 2022 season. Bryce Carithers

Enumclaw made the Class 2A state quarterfinals in 2021 and returned an All-2A South Puget Sound League back in Otero. Not the easiest way to start the season for Peninsula.

“We knew that Enumclaw was a hard-working, disciplined team from the beginning,” Laybourn said. “We love starting our season off with an opponent who challenges us to be our best. This allows us to see what we really need to improve on.”

The Seahawks will take that attitude with them when they play again at 7 p.m. Thursday, Sept. 8, against Kentwood High School at Roy Anderson Field in Purdy.