Posted on April 7th, 2022 By: Charlee Glock-Jackson
Share this article:

A local artist’s gesture of support for the people of Ukraine — a mural of a sunflower set against the blue and yellow of the Ukrainian flag — was vandalized Wednesday night.

The mural is on a wall outside Devoted Kiss café on North Harborview Drive and was painted by Hillarie Isackson, whose art studio is next door. Isackson was commissioned last winter to paint a holiday mural at the same location, and it became the backdrop for many Christmas photos.

Isackson paid for the sunflower mural and spent a rainy, blustery Monday painting it. She worked late into the night before returning before dawn on Tuesday to finish. 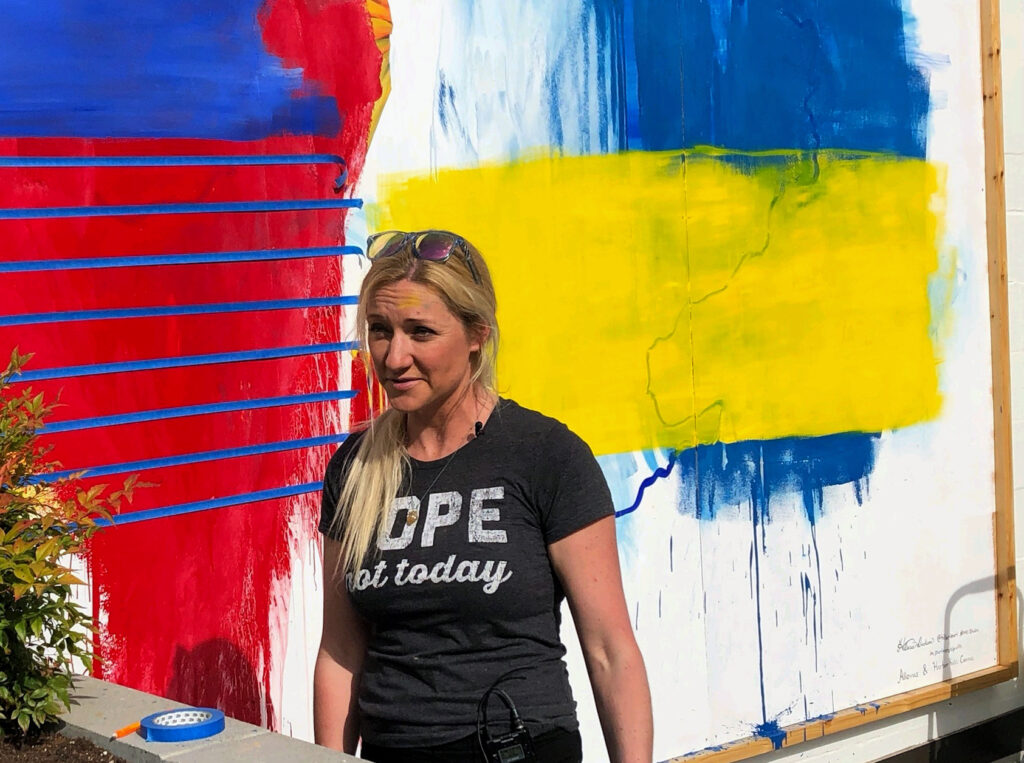 Artist Hillarie Isackson paints over the damage to the mural she painted in support of Ukraine near her gallery on North Harborview Drive. Ed Friedrich

It was there for less than 48 hours before vandals threw buckets of red, white and blue paint onto it, then left their footprints in paint on the sidewalk.

According to Isackson, several people saw the perpetrators defacing the mural and took videos “that have been given to the police,” she said. “And the police came and took photos of the footprints, also.”

A new vision for the mural

Isackson was back at the mural Thursday afternoon, perched on a ladder, transforming the damage into a new message of support for the Ukrainian people.

“I saw on the internet how artists all over the world are making art to support the people of Ukraine, and I thought, ‘Gosh, I want to do something like that for Gig Harbor,’” Isackson said. “It wasn’t meant to be controversial, just to show support for people — other human beings — who are suffering. My heart just breaks for them.” 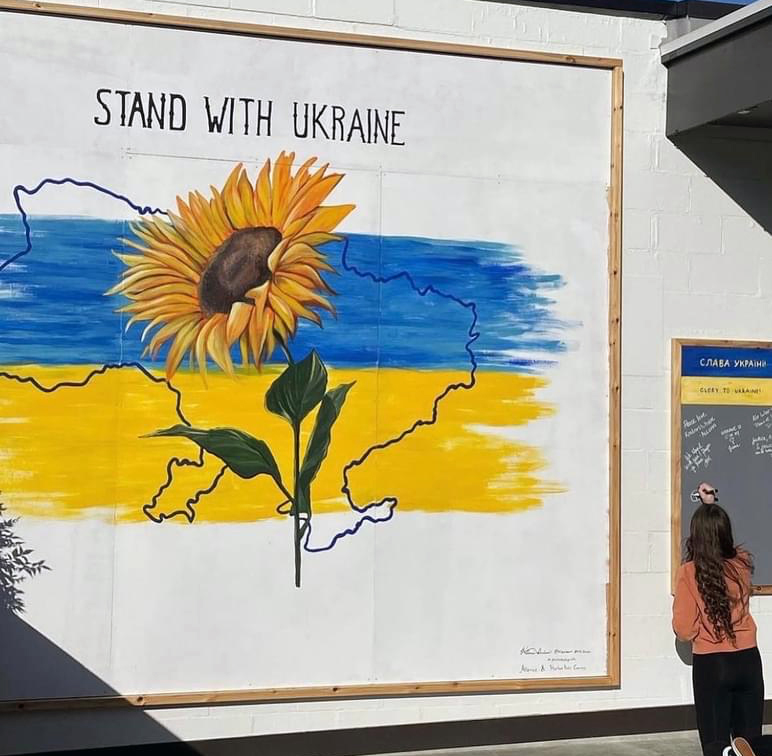 Hillarie Isackson’s mural before it was vandalized.

People are dropping off donations of paint and money to purchase other supplies, as well as spotlights to help Isackson work through the night — again — to finish what is now a transformation of her original idea.

She’s painting the flowers of other countries that are supporting Ukraine.

We our saddened to see the vandalism done to a truly inspiring mural showing support for Ukraine in our Finholm District overnight. This conduct is not common in #GigHarbor and we truly don’t understand the intent of this act.

“It will be like a garland of flowers all around the damage,” she said. “And I’m painting an American flag in the background over that red, white and blue paint that was thrown on it.”

She added that someone had brought a small bouquet of flowers to the site, and she hopes that trend will grow. “The sunflower is the national flower of Ukraine. So I hope that people will just fill this space with yellow and blue flowers to show that we’re all united with the Ukrainian people.”

‘I have no words’

Victoria Davidenko’s parents and older brother came to the U.S. as refugees from Ukraine in 1995 and settled in Gig Harbor. She was born here, grew up here and graduated from Gig Harbor High School. 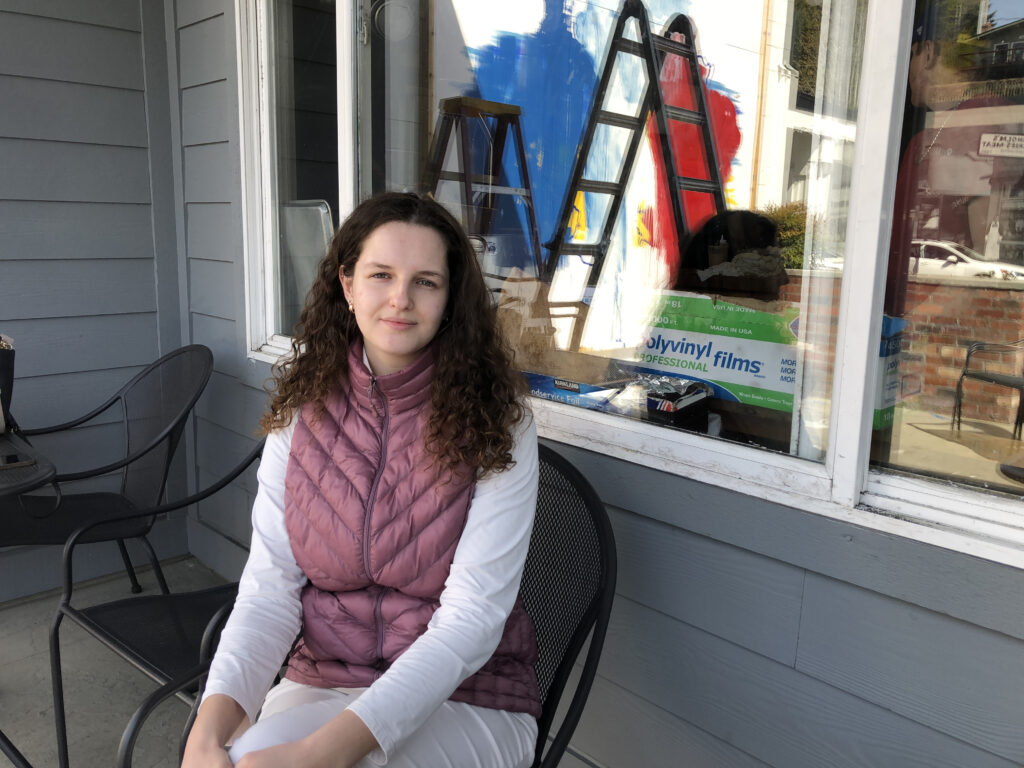 Victoria Davidenko’s family came to Gig Harbor from Ukraine in 1995. She is a Gig Harbor High School graduate.

“My extended family came to this country as religious refugees,” she said. “They came with nothing and now they are models of the American Dream,” as she looked at the damaged mural.

She spent several years in Ukraine as a Peace Corps volunteer, teaching English in a tiny village, until the Covid pandemic sent all the volunteers home.

When the Russian invasion began, she tried to make a secret plan to return to Ukraine to help refugees.

“But I wasn’t able to connect with anyone who was working there, and my mother said that our family is here (in the U.S.) for a reason: To make money and send it to Ukraine. My dad has been donating to the war effort there for years,” Davidenko said.

“My parents are both very patriotic Americans. But I have no words for how I feel about this (vandalism). This is like the extermination of our culture and our existence right in front of my eyes. Whoever did this doesn’t understand democracy,” she said. “It’s not helping Russia. It’s not helping anyone. It makes things worse. The Ukrainian people just want to be free. There are many problems, but at heart, they want Western values.

“Seeing this happen in my small, beautiful town is heartbreaking. I really, really hope they are found – whoever did this.” 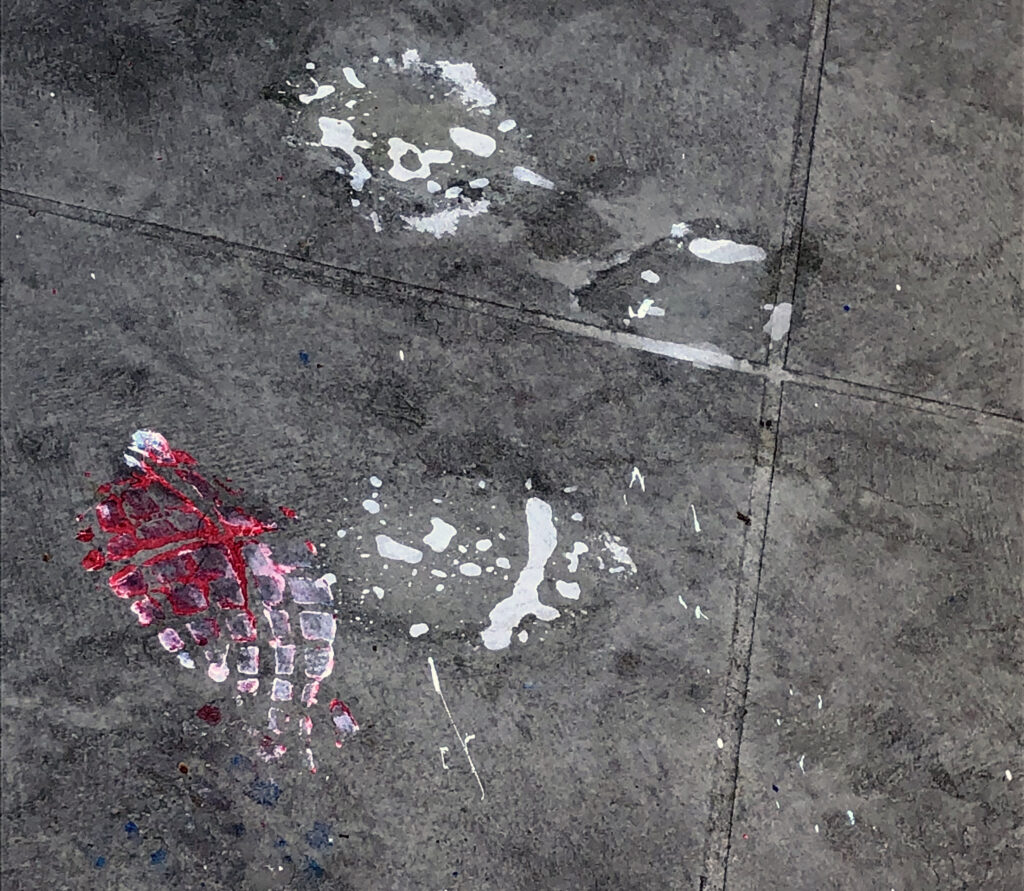 Footprints were left near the mural.

City councilmember Jeni Woock, herself an artist, called the original mural “a wonderful pierce of art wishing peace for Ukrainians and standing in solidarity with the world in condemning war.

“The beautiful mural was celebrating and honoring the people of Ukraine. The destruction of this art does not destroy the love and caring for peace for Ukrainians, it only intensifies those wishes.”

Mayor Tracie Markley issued a statement condemning the vandalism. “An act of vandalism like the destruction of our Ukraine mural last night is heartbreaking to see,” Markley said.

“Gig Harbor has always been a place of welcome and warmth. We see that in the quick response of our community today, as well as the resilience and creativity of muralist Hillarie Isackson of HART Studio as she works through the night to re-create this mural into a new piece entirely. These are the kind of uplifting actions that show the true spirit of Gig Harbor.” 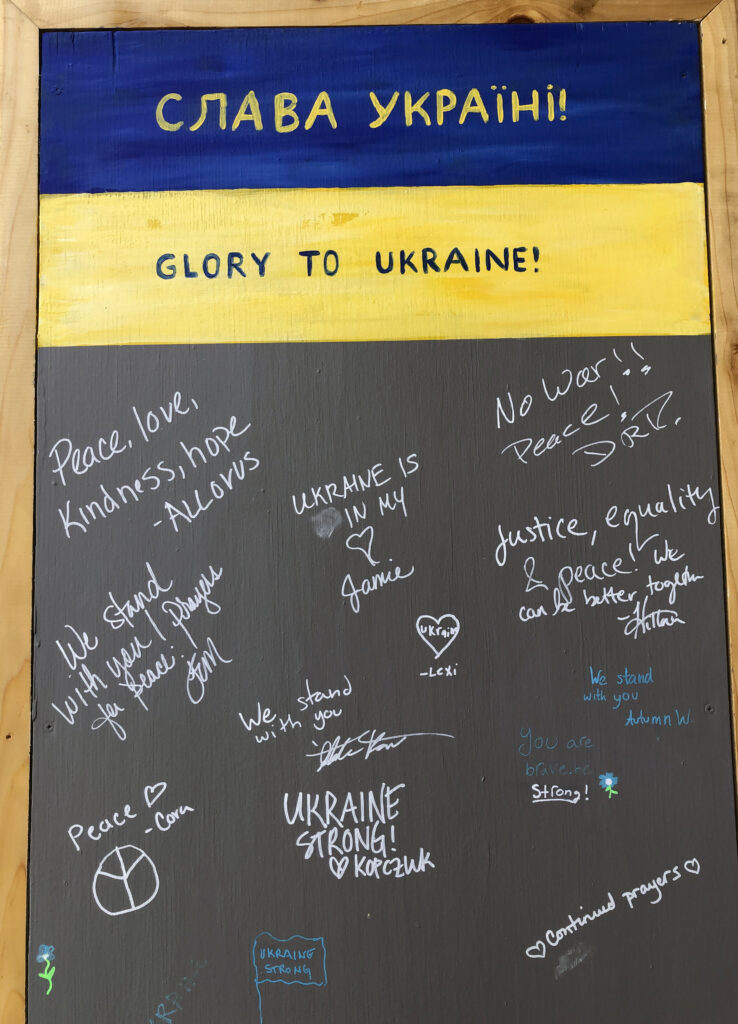 Passers-by wrote messages of support on a chalkboard near the defaced mural.