A new Guardian now keeping watch over the waters of txʷaalqəł

Posted on September 15th, 2022 By: Vince Dice
Share this article:

Puyallup Tribe Culture Director Connie McCloud paused with emotion when describing the significance of the place known as txʷaalqəł to her people.

“Here on the waters and on this land, our ancestors have lived here for thousands of years. We remember them today and acknowledge them,” McCloud said. “Those that lived here fished and raised their families here. (They) greeted the new and different people who came here.” 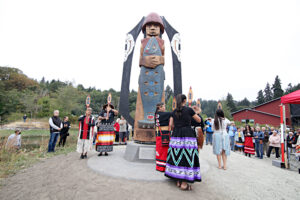 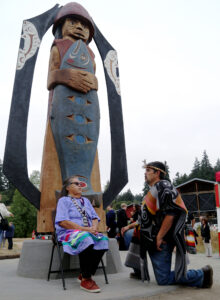 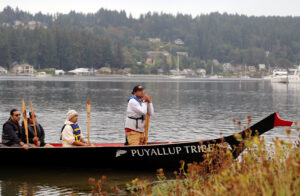 She described the txʷaalqəł village site, now known as Austin Park at txʷaalqəł estuary, as a place for ceremony and celebration.

It was that again on Thursday, Sept. 15, when tribal and city officials unveiled and dedicated a 14-foot-tall statue called Our Fisherman, Our Guardian.

Many years of effort

Thursday’s ceremony was the culmination of a yearslong effort by the tribe, community groups and the city to create a work to honor and acknowledge the original inhabitants of what is now Gig Harbor.

The area where Our Fisherman stands was for centuries a village of the sx̌ʷəbabš band of the Puyallup Tribe. Yet when non-native settlers established a fishing village of their own here, they honored none of that history.

Gary Williamson, a retired teacher who led a committee that worked to rectify that wrong, moved to Gig Harbor in 1959. “I never heard anything about any indigenous people. Ever. No street names, no nothing. Nobody ever mentioned anything about natives.”

Our Fisherman, Our Guardian.

After years of research and negotiations, acclaimed artist and Quinault Nation President Guy Capoeman was commissioned to create Our Fisherman, Our Guardian.

“I believe it’s important for tribes to tell their own stories,” Capoeman said Thursday.

The 14-foot-tall statue faces the water, welcoming people arriving by canoe or boat. The figure holds a giant salmon and is framed by canoes on either side.

Before beginning the work, Capoeman spent several days at the site. Experiencing the sounds, sights and smells of txʷaalqəł was an important part of the process, Capoeman said.

“A lot of those things that I heard and I experienced for those few days,” he said, “they were the same things our ancestors experienced.”

The figure’s size reflects Capoeman’s abiding respect for the people who lived at txʷaalqəł.

“They had to be strong people to live here,” he said, citing the same cold and windy winters that modern residents experience and complain about. “I wanted to reflect that with a figure who was larger than life.”

‘Medicine for our people’

The connection between current tribal members and ancestors who lived at txʷaalqəł is recent and very real. Puyallup Tribal Councilmember Anna Bean told the crowd at Thursday’s dedication that her own children descend from people who lived there.

“I just can’t believe that the sx̌ʷəbabs have been recognized in this way,” Bean said. “This isn’t just a totem. It’s not just something to look at. This is medicine for our people.”

A chance for healing

Speakers at Thursday’s ceremony emphasized the cooperation required to complete the project. The Puyallup Tribe played the leading role, but the city of Gig Harbor, the Kiwanis Foundation and a committee of volunteers led by Williamson provided funding and support.

The tribe and non-tribal settlers didn’t always cooperate or have cordial relations.

McCloud recalled the so-called “Fish Wars” of the 1960s and ‘70s. Tribes asserted their treaty rights and demanded protection for salmon. They often found resistance in non-tribal communities.

She called the Gig Harbor area a “hostile community” to many tribal members in those days.

“It wasn’t easy for our people to come to this community where we have always fished,” McCloud said, acknowledging that many non-tribal fisherman in those times feared for their livliehood. “Words. Rocks. Those are the stories that were told. There was gunfire in the dark.”

Our Fisherman, Our Guardian could present a chance for healing between the communities.

“This community has grown to understand, appreciate and acknowledge the first people,” McCloud said. “It’s been a wonderful opportunity. Future visitors will see and recognize that the native people are present.

“And we ARE present.” 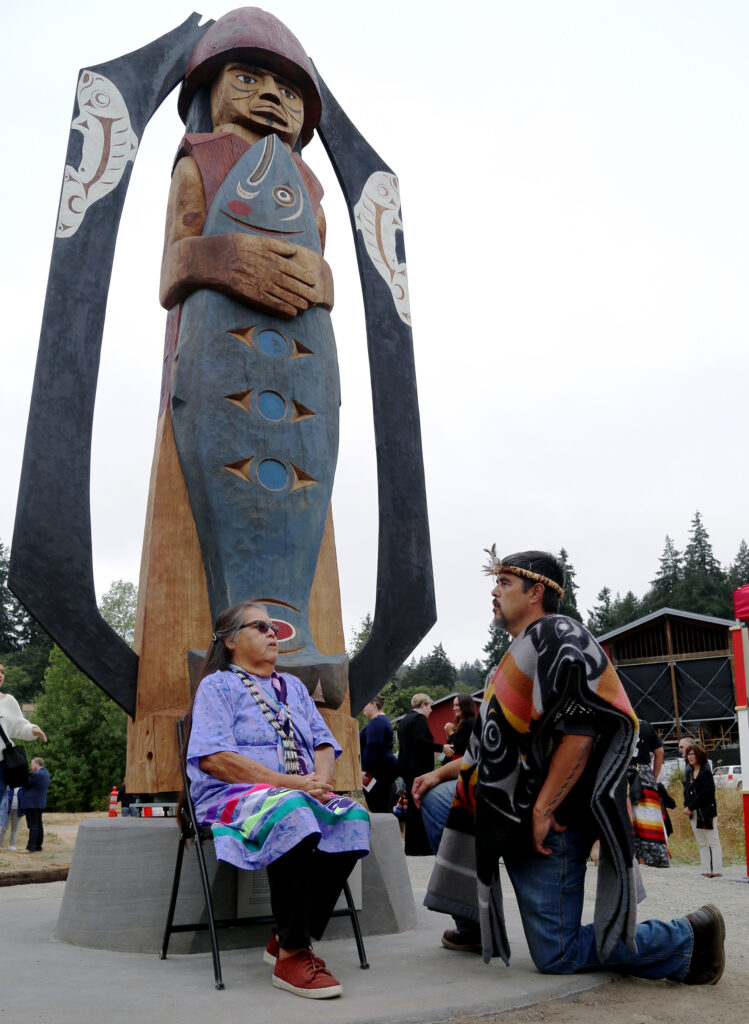 Puyallup Tribe Culture Director Connie McCloud, left, and artist Guy Capoeman speak in front of Our Fisherman, Our Guardian after the statue was dedicated on Thursday, Sept. 15. Vince Dice

Editor’s note: This story has been updated since it was first posted. An earlier version mis-stated information about when Gary Williamson moved to Gig Harbor. We regret the error.