‘Our Fisherman, Our Guardian’ the culmination of years-long effort to honor area’s original inhabitants

Posted on September 13th, 2022 By: Charlee Glock-Jackson
Share this article:

It has taken many generations, but Gig Harbor will finally acknowledge and honor the first people who lived in this area – the sx̌ʷəbabš band of the Puyallup Tribe of Indians – with the dedication and blessing of a carved redwood statue in Austin Park at txʷaalqəł Estuary on Thursday, Sept. 15.

The statue, “Our Fisherman, Our Guardian,” was carved by artist Guy Capoeman, president of the Quinault Nation. It depicts a Salish fisherman holding a huge salmon — in Capoeman’s words, “The One with All, the Ancient Ancestor.”

The fisherman wears a woven cedar hat and a cedar vest typical of those worn by the Puyallup Tribe. The big salmon has a copper overlay and three blue glass circles that symbolize the water where the salmon live. On each side of the figure stands a Southern Salish-style canoe, also carved from redwood.

Artist Guy Capoeman, left, and his son Cecil with “Our Fisherman, Our Guardian.” Charlee Glock-Jackson

“The fisherman is our first line of defense in our ancient way that the people knew all about our waterways and what was in them,” Capoeman said. “Surrounded by canoes in every aspect of our lives from birth to death, from social events, to work, to warfare, the Salish and the canoe are one.”

The canoes are also a reminder that a primary duty of the sx̌ʷəbabš – Swift Water people – was to protect the Narrows and the southern entrances to the Salish Sea. “They were protectors and so they always had their canoes ready,” Capoeman said.

Our Fisherman, Our Guardian has been placed at water’s edge at the site of txʷaalqəł, one of the largest sx̌ʷəbabš villages. “It honors the people that were here and their presence here,” Capoeman said last month when the sculpture was installed. “Those ancestors are still here.

Guy Capoeman’s original sketch of the work that became Our Fisherman, Our Guardian.

The “Honoring Project,” as the process of commissioning and creating the sculpture was called, began six years ago. A group of Gig Harbor residents, led by retired teacher Gary Williamson, brainstormed how the city could honor the original inhabitants of the area.

At that time there was nothing in Gig Harbor — not even a street name — that referred to the Puyallup Tribe’s ties to the area.

The group first considered commissioning a “welcome arch” comprising two large carved poles joined at the top by a carved salmon. One post would represent the first people, the sx̌ʷəbabš. The other would represent the mostly Croatian fishing families who settled in the area hundreds of years later.

The salmon-shaped arch would symbolize the main food source of both the Native and settler families, according to an April 2016 letter from the “honoring committee” to the mayor and city council.

The committee proposed installing the arch near the sidewalk in what was then called Austin Estuary Park. The park originally was the site of the txʷaalqəł village, and, later, a lumber mill run by the Austin family. 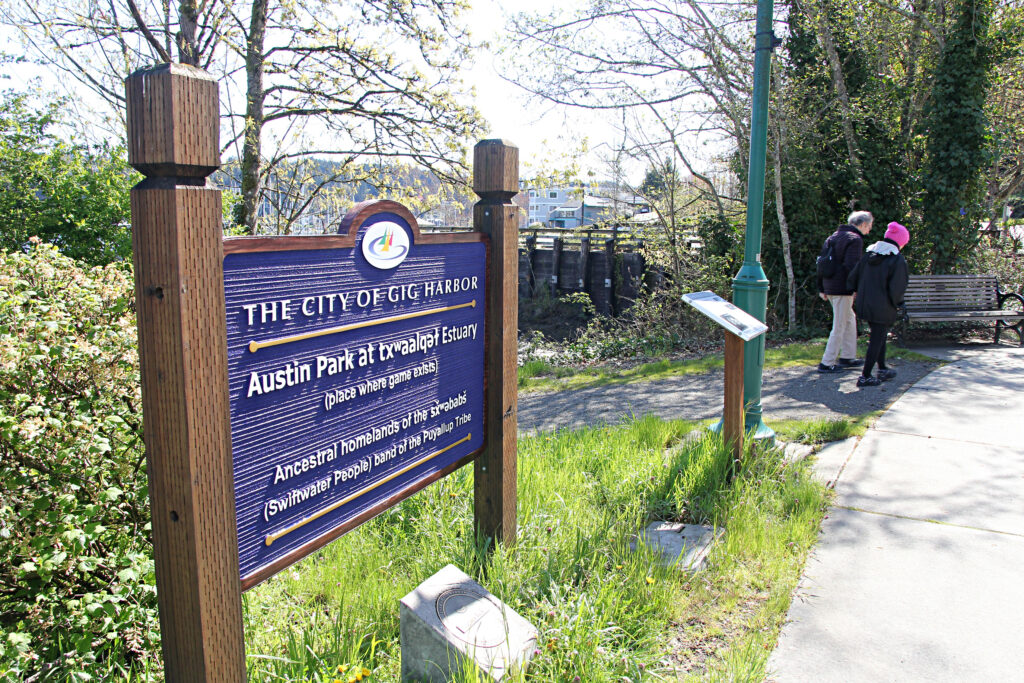 As conversations with the tribe and the city progressed, the concept changed. The committee, tribe and city decided the artwork should honor the Puyallup’s fishing heritage and incorporate the tribe’s social, cultural, geographic and historical influences. Educating people about salmon’s central role in tribal culture was also prioritized.

And, instead of placement near the sidewalk along Harborview Drive, the group opted for a location close to the shore. There it welcomes people who come by land or by water.

Carving the artwork took many months. The hardest part, Capoeman said, was finding the right log.

He located it in Shelton, and the log itself has a story.

When Capoeman saw the huge log, he knew it was what he was looking for.

“It’s beautiful wood and it was wonderful to carve,” he said.

Kuhn went to work to strengthen the relationship between the city and the Puyallup Tribe.

With his encouragement, in September 2020, the city council recognized the second Monday in October as “Indigenous Peoples Day” and the month of November as “Native American Heritage Month.” The same resolution called flying the Puyallup Nation flag in the council chambers in October and November.

It also required the reading of a “land acknowledgement” statement at the beginning of every regularly scheduled council meeting. The acknowledgement recognizes the ancestral and traditional lands of the sx̌ʷəbabš band of tribe.

Kuhn formed a committee of council members, tribal representatives, and others to explore renaming a city park to further honor the sx̌ʷəbabš band. In February 2021, the city council restored the original name of txʷaalqəł to Austin Park and designated the park and surrounding area as txʷaalqəł Estuary.

Our Fisherman, Our Guardian will be unveiled and blessed Thursday in a public ceremony lead by Tribal Council members, the city of Gig Harbor and artist Capoeman.

Anna Bean, a tribal council member and Gig Harbor resident, will speak on behalf of the Tribe.

“Over the last three years, the city has slowly taken time to acknowledge and be inclusive of the original caretakers of this area,” Bean said in a recent phone conversation. “And this ceremony and blessing of this beautiful artwork is a perfect time to celebrate that.

“I value the time that was taken by the city and the citizens to do things right. They asked the right questions and worked with us and so this is not just a piece of art. It’s a symbol. Totems are prayers and stories and this will be a piece of prayer in the community and for all who’ll be there – the city, the tribe and the other tribes and all the community.

“Our history is often re-written by others. This gives us the chance to keep it to the facts. And we’re excited.”

Thursday’s event will also include dancers, drummers and an appearance by traditional tribal canoes.

The ceremony begins at 10 a.m. Austin Park at txʷaalqəł Estuary includes 1.38 acres of developed tidelands and 7.07 areas of open space tidelands. The park is located at 4009 Harborview Drive.

Editor’s note: Funding for Our Fisherman, Our Guardian came from the city arts commission, the Puyallup Tribe and the Kiwanis Foundation. An earlier version did not mention that funding came from the tribe and Kiwanis in addition to the city.