Posted on September 23rd, 2022 By: Dennis Browne
Share this article:

It’s time for the return of the Sports Beat. Every Friday, we will provide a weekly capsule of athletic events that involve competitors from Gig Harbor and Peninsula high schools.

The girls volleyball season is in full force, as the Peninsula Seahawks are 3-1 and 2-0 in South Sound Conference play. The Seahawks made an impressive run in last year’s state tournament, almost winning a state title before losing in the championship to Mead, 3-1.

Quite a few players return from head coach Katrina Cardinal’s Seahawks. Peninsula opened the season with a 3-0 loss against Class 4A team Bellarmine, then regrouped to sweep Silas, Central Kitsap and Capital. Look for a feature on the team and their program’s rise next week in Gig Harbor Now. 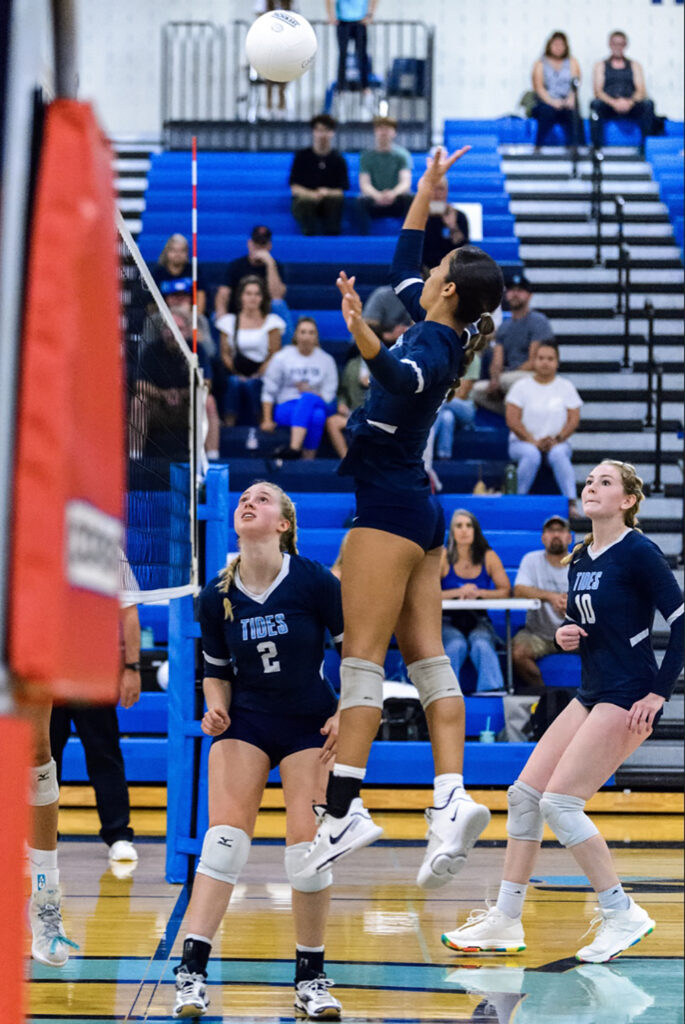 The Tides’ Camryn Kelly shows her vertical leap before pounding a spike against Bainbridge Island. Photo by Bryce Carithers

The Gig Harbor girls volleyball team is 4-1 with decisive wins over Bainbridge Island, Kentlake, Yelm and River Ridge. The Tides swept all of those teams but, like the Seahawks, had a tough time with a 4A power in a 3-0 loss to Curtis. The Tides will face Central Kitsap Tuesday, Sept. 27 on their home court before traveling to play Timberline on Thursday. Both games are at 7 p.m.

The Seahawk tennis team is listed as 2-3 by the SSC conference website. They enjoyed a win over North Thurston 3-2 before taking a match from the Tides in the 4-1 loss. They will face Capital on Tuesday, Sept. 27, and Yelm on Thursday. Both matches begin at 3:30 p.m. at Peninsula.

This is a great year for cross country in the Peninsula School District.

The Gig Harbor girls team are ranked No. 1 in the state by the Washington State Cross Country Coaches Association. They are anchored by Reese Morkert and Taylor Sletner, who were both all-state last year. The GH boys team is ranked second in the state and led by all-state performers Micah Galeana and Tyler Campbell. Both boys and girls Gig Harbor teams won the PLU invitationals on Sept. 10.

Gig Harbor secured the cross country coaching of a running and coaching legend from the area. Patty Ley, who was a multiple-time state champion at GHHS and an All-American at Pacific Lutheran University, has returned.

Peninsula and Gig Harbor have some of the best female x- country runners in the state this year. Photo by Bryce Carithers

She qualified for the 1992 Olympic Trials in the 1500m. She was a coach at Gonzaga University before coaching the Tides in the mid 2000s. Her teams won several state titles then and now she is returning to take over both of Gig Harbors cross country teams this year.

“They’re the top two fastest girls in PHS history, in both track and cross country,” Peninsula coach Tyler Nugent said of the duo.

The boys team is led by Logan Parrish, who was voted all-state last year, and Cooper Leavengood.

The Seahawks host Timberline at 7:30 p.m. Tuesday, Sept. 27. They play league co-leader Gig Harbor at 7 p.m. Friday, Sept. 30, at Roy Anderson Field. The winner of that match should have the inside track to a SSC soccer title.

Ella Coates looks for a teammate to pass to in Peninsula’s 4-0 win over North Thurston. Photo by Bryce Carithers

The swimming and diving season will make a big splash this Saturday, Sept. 24, at Olympic High School in East Bremerton.

Peninsula and Gig Harbor always have formidable teams and both will look to win this upcoming meet. Competing teams include Silas, Shelton, Port Angeles, Klahowya, Kingston, East Jefferson, Central Kitsap, Bremerton and Olympic. The action will start at 10 a.m.

Peninsula and Gig Harbor faced off in the 44th Fish Bowl on Sept. 16. The Seahawks earned a hard-fought victory, 39-30, in an exciting game that wasn’t decided until the final minute. Peninsula climbed to 2-1, on the season and 1-0 in SSC play.